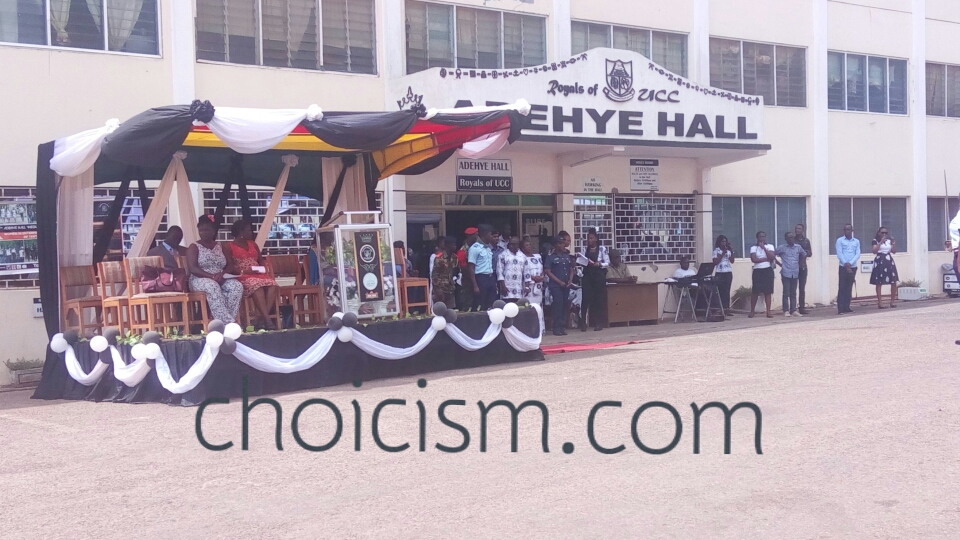 It was in a grand style as the all-female hall in the University of Cape Coast (UCC), Adehye Hall held a grand durbar as part of the hall’s 54th Week Celebration.

The grand durbar was colored with beauty as culture was on display at the forecourt of Adehye Hall on Saturday, 18th February, 2017.

In an address by the hall warden, Mrs Paulina Kwafoa, she explained that the hall ensures that training is given to the Royals in order to make them women of substance in all fields of endeavor.

“I must confess that, Adehye Hall inculcates good virtues in her Royals to excel everywhere. The hall continues to ensure that the Royals are trained in all spheres of their lives, traditionally, culturally, and intellectually.”

Mrs Paulina Kwafoa again added that students should restrain from distractive extra curriculum activities that may not help them study hard.

“I also urge you to stay off extra curriculum activities that have the potency of affecting your studies negatively”, she advised.

A banker and a retired Army officer, Nana Kwesi Amoako, was the guest for the durbar. He advised the Royals to make good use of opportunities available to them while they are in school.

“You don’t need to wait and get out of school and be jumping from one office to the other looking for a job, where you are going to have problems with managers and directors and CEOs trying to go to bed with you before they can help you with a job”.

On parade was the Air Force Cadet Corps of the hall with great display as they thrilled the audience.
The Cadet had support from the Osagyefo  Regimental Band of the Kwame Nkrumah Hall of the University with their great  tunes, the Cadet corps had a great parade at the durbar.

The programme was chaired by the Vice-Dean of Student affairs of UCC Dr. Eugene Dartey who in his response advised students to be innovative in order to be self-employed.

“In the past few days you have undertaken programmes which will make you entrepreneurs when you go out there.  Don’t expect somebody to employ you, create the next job to employ the next person”, Dr. Gartey said.