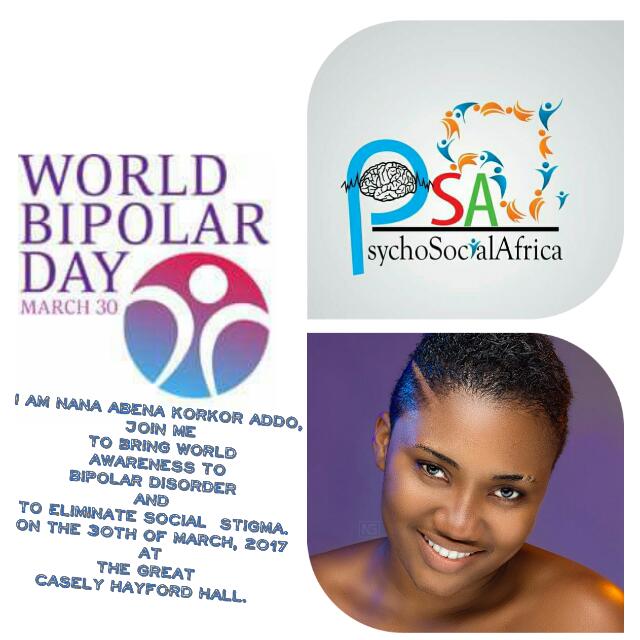 As part of activities marking this year’s World Bipolar Day (WBD), an initiative of the Asia Newtork of Bipolar Disorder, Nana Abena Korkor Addo, a final year student of the University of Cape Coast and a bipolar champion, will hold a seminar on Bipolar Disorder at the Casely Hayford Hall (Casford) on Thursday, March 30, 2017.

After making a spectacle of herself two years ago at the Casford Hall while suffering from bipolar disorder, Abena Korkor of Psychosocial Africa returns to the hall to create awareness on the disorder.

The seminar is also aimed at educating and improving sensitivity towards the illness and also eliminating the social stigma attached to the disorder.

Students will have the opportunity to interact with bipolar champions.

There will also be discussions on other health issues such as suicide, vandalism and how these mental disorders affect individuals.

Psychosocial Africa is  an organization that is aimed at setting up support groups with the view to highlight the importance of mental health.

Details of the programme are:

Bipolar disorder is a brain disorder that causes unusual shifts in mood,energy, activity levels, and the ability to carry out day-to-day tasks.

According to the WBD, symptoms of Bipolar disorder are severe and different from the normal ups and downs that everyone goes through from time to time.

It is estimated that the global prevalence of bipolar disorder is between 1 and 2% and has been said to be as high as 5%. According to the World Health Organization, it is the sixth leading case of disability in the world.