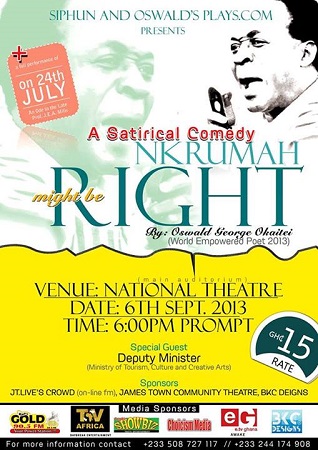 ‘Nkrumah Might be Right’ Plays Again on Sep. 6 at the National Theatre

For one more chance, Siphun and Oswald’s Plays.kom present Ghana’s 21st century most realistic satirical comedy, NKRUMAH MIGHT BE RIGHT! at the the National Theatre of Ghana on Friday, September 6, 2013 at 6pm.

The play was first staged at the Center for National Culture (CNC)-Accra and has since been reloaded with more plots and sound tracks. The play reflects Ghana’s 21st Century politics (NPP and NDC wahala) vis-a-vis Osagyefo Dr Kwame Nkrumah’s ideology.

The Special Guests at the production will include Hon Dzifa Abla Gomashi, Deputy Minister for Tourism, Culture & Creative Arts, among others.

WHY YOU MUST NOT MISS “NKRUMAH MIGHT BE RIGHT!”:

1. You would have the chance to watch Oswald strip naked the sweet beautiful tradition of Ghana’s ‘mbuguo’ (Story telling) in a poetry performance with the “MIISH3JEL)I DANCE ENSEMBLE”

2. You would have the chance to watch the “MIISH3JEL)I DANCE ENSEMBLE” in a splendid choreography alongside a poetry by Oswald.

3. You would see a renowned Kenyan Poetess burst up with marvelous ppoetry Explosion

4. You would watch the most recent and humerous political comedy ever in the history of Ghana:

5. You would have the chance to take pictures with some political and showbiz celebrities.