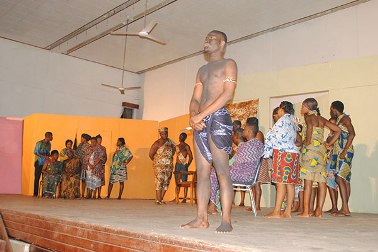 The Department of Theatre and Film Studies of the University of Cape Coast has launched the second semester theatre season in a grand style at the Main Auditorium, North Campus.

Spectators at the launch were treated to excerpts of hilarious and entertaining plays to be performed by students of the department as well as high rated African films to be shown during the season.

The plays to be performed during the season are John Brigss Paradise by Pierre Meunier; Son of the Land by Effiong Johnson; The Leopard’s  Choice by Yaw Asare; Burning of Rags by Francis Imbuga and Medicine for Love by James Henshaw.

Launching the season, the head of the Department of Laboratory Technology, Prof. Ernest Owusu Ansah who represented the Pro-Vice-Chancellor at the function noted that with the spectacular performance of the theatre and film industry there was no doubt that UCC students would soon become leading stars in Ghana and beyond. He commended the lecturers for equipping the students with the requisite skills and knowledge to address societal problems through plays.