Eclipse of the Sun on Nov.3 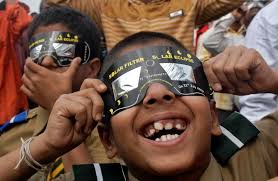 Ghana and other parts of West Africa, will on November 3, 2013, experience a partial hybrid solar eclipse.

A partial hybrid solar eclipse is an eclipse, where there is a maximum partial cover of the Sun by the Moon.

It will happen at 22 minutes after 1 p.m. that day, barring any rains or cloudy weather, and Ghanians will see the normal afternoon sunny light being dimmed to evening for about one-and-half minutes, when the face of the Sun would be covered 80-85 per cent by the Moon.

The rare phenomenon, was disclosed by Prof Emmanuel Amamoo-Otchere, who was formerly the Executive Director of the Centre for Remote Sensing and Geographic Information Systems (CERSGIS) of the University of Ghana, Legon. He is now a member of the African Astronomical Society.

He said, the rare occurrence had been known for some time but had to be confirmed by partners such as the National Aeronautics and Space Administration (NASA), which has diagrams of the phenomenon on its website.

Briefing the Daily Graphic, Prof Amamoo-Otchere, who spearheaded information dissemination on the rare occurrence in 2006, when he headed CERSGIS, said it was important for Ghanaians to be aware of what was to happen and protect their sight on that day.

He said all needed shades to view the phenomenon as was done in 2006.

How it will happen

“There will be partial darkness, similar to dusk, and the eclipse will be seen in Eastern America, sliding to West Africa and finally dissipating in Central Africa,” Prof Amamoo-Otchere said.

“Those along the coast, from Half Assini to Aflao, will experience a wave of darkness in the skyline of a duration of a minute or two. He said inland, the phenomenon would be experienced in the northern parts of the country, as far as Burkina Fasso,” he added.

Prof Amamoo-Otchere said what was not certain was animal behaviour at the time of the eclipse, but he said it was likely that for the split moment of darkness, some birds would change direction in flight.

“It is possible to see some twinkling stars and some planets,” he added.

Prof Amamoo-Otchere said for him, the phenomenon showed that there was a super engineer, that is God, who was super precise in all his doings and was still working.

He said, it also showed the scientific skill of man in calculating the point at which the Sun, Earth and Moon aligned that resulted in one blocking the other.