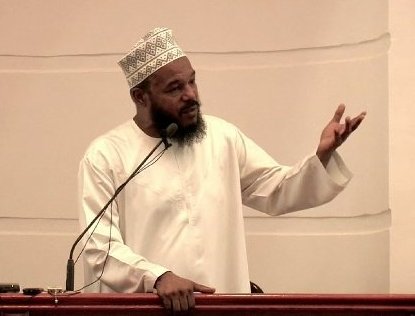 Dr. Bilal Philips, an Islamic scholar, speaker, author and founder of the Islamic Online University on Tuesday delivered a speech to a group of excited Muslims from in and around the university community at the School of Medical Science Auditorium on the topic: ‘Seeking Knowledge’.

Dr. Philips is in Ghana for a visit and will speak to students in diffferent other campuses in the country.

In his speech, he blessed the student dominated audience with goodwill messages and told them to see their stay on campus as a form of worship to Allah since an ignorant person cannot worship Allah.

Making emphasis on Knowledge, Dr. Philips cautioned students to be aware of other forms of knowledge that may not be rewaqrding to the individual and his maker.

He mentioned those forms of knowledge as false knowledge and cited an example of Darwins theory of evolution and how it seeked to remove God from the history of the world, non beneficial knowledge as the USA’s $4 billion experiment of Mars soil whiles over 4 million American citizens are homless and beneficial but not appropriate knowledge as say a man becoming a gynecologist or a mid-wife when it violates the Muslim woman’s modesty.

Dr. Bilal Philips then adviced the students that Allah does not condone cheating and so they should stay away from it as Muslim students.

Dr. Abu Ameenah Bilal Philips was born in Kingston, Jamaica, and grew up in Toronto, where he converted to Islam in 1972. His whole life has been exemplified by his goal of seeking and conveying Islamic knowledge in order to “Change the Muslim Nation through Islamic Education.”