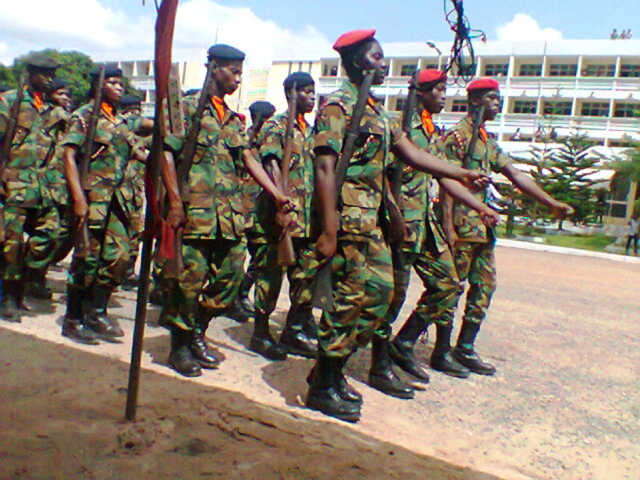 Kwame Nkrumah hall on Saturday 8th of March 2014 held a grand durbar at the forecourt of the hall to commemorate its 16th hall week celebration which was under the theme ‘accelerating the body politic the role of Ghanaian leaders and tertiary students’. The durbar which was named, ‘excellence durbar 2014’, was attended by many personalities in the university community and was chaired by, Professor Atta Britwum, first hall master of the hall and head of French Department.

The programme which was moderatored by Mr Stephen Ekow Essel, member of the hall’s counselling unit, was preceded by an assiduous display from the hall cadet and a cultural display from the members of the school for the deaf.

Giving his state of the JCR address, the President of the hall, Mr D J. Sambah Francis said the country is filled with ,‘politics of negligence’,  where a few section of the total populace  enjoys the net share of all. He therefore charged our leaders to show holistic and sacrificial leadership style to Ghanaians.

According to him attitudinal change of tertiary students and hardwork coupled with diligence should be the benchmark of every haller and tertiary students as part of their contributions the politics of Ghana. He also stated that the hall has been able to install CCT cameras at vantage points of the hall to monitor theft and will soon start construction of a hall annex which will house more students.

The program also saw the commissioning of a renovated reading room to serve the study needs of hallers. The reading room now has a standing air-condition, polished desk sand chairs with glassy doors. Inaugurating the room Professor Atta Britwum said , ’this room is inaugurated with the aim of providing a suitable environment for you hallers to study. Each and every one of you should endeavour to make good use of it and preserve its rich content’.

When choicism.com spoke to some participants of the program they expressed their joy at the hall celebrations. From some continuing students, they have never witnessed a better hall week celebration.

Mr David C. Adukpo, hall master of the hall, Dr. Mrs Bett Offei, representative from the Dean of Students, former hall masters,hall tutors, hall workers, SRC president ,Mr David Boakye, former JCR Presidents of the hall, SRC Treasurer and affiliate of the hall, Raymond Achalle, Oguaa hall and Valco hall JCR presidents  and many others were some of the personalities that attended the program.