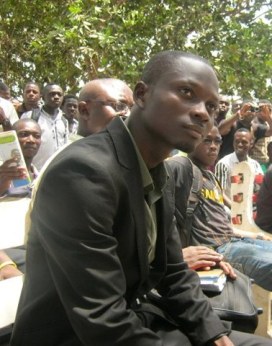 The SRC President, Master Enoch Boateng popularly known as pacesetter is fast becoming unpopular among his followers and students of the university according to complaints and reports reaching choicism.com.

Pacesetter who has just finished overseeing the organization of the UCC [email protected] Annual Week Celebration is taking more bashing for the manner in which the whole program was planned and executed.

Numerous students who took their reservations and grievances about their perceived poor organization of the SRC week to the popular facebook gossip center UCC Gossipz could not hide their frustrations about their perception of his administration.

Several class of students took their turns at the facebook group to say what they had on their minds. Whilst some concentrated on the SRC week, others chose a general assessment of his tenure of administration.

Below are some comments made by students.

Governor Tetteh: OMG!!! am beginning to hv second thoughts. should i become an artist or a dj. hmmm, anyone can do dis on stage… src week street carnival, apuuuu.

Dezmond Atl Lib: am yet to see what Pacesetter will do to be better than Mununkum. don’t kno frm de past bt comparing last yrs to dis yr, dis yrs entertainment team organised somfn just to enable them benefit frm somewher rather than satisfying de students.

Braa Sergio: Personally, I think Pacesetter is the worst SRC President UCC has ever had.
Can someone please tell me what he’s done so far???

Ricardo Saved Liryx: he has done nothing good for the school since he came into office. at least mununkum even built a public toilet at science market.lol…..

Naa Kwarno Otoo: He came condemning Munukum and saw so many loop holes yet he came and created gutters,dis shd be a wake up call to all leaders, get pple’s ideas on board cuz u cnt do everytin all by ya self