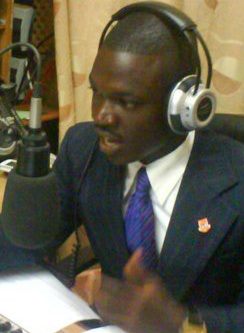 An Ace Journalist, and main Host of Love Reasons on ATL FM, Paul Ofori Amanfo, has been elected as the President of the University of Cape Cast Chapter of the Graduate Students’ Association of Ghana (GRSAG-UCC) for the 2013/2014 academic year.

Doris Mensah Wonkyi who went unopposed for the Secretary of the association pulled 456 (94.41%). Frank Baidoo Baiden won the Organising Secretary of GRASAG-UCC with 281 votes (59.66%), with the other contestant, Tettey Michael, pulling 190 votes (40.34%).

Speaking to ATL FM News, Paul Ofori Amanfo, popularly called ‘The Monkey in the Chair’, said he will make sure he provides a good leadership to propel his team to fulfill the visions they outlined to the students during their campaigning.

“We’ve told them a lot; in terms of their bursary, issues with their completion rate, issues regarding accommodation, and a host of other issues that we brought on board. To me, I am in to be provide a productive leadership, a very responsible leadership; a leadership that they can trust, a transparent and accountable leadership, and a participatory leadership” he said.

“I think that is a very important thing that I would want to ensure becomes a reality; that my members will be part and parcel of everything we do every step of the way. And I think that is very crucial. We don’t have any excuse to deny our members the opportunity to know what is going on in the association”.