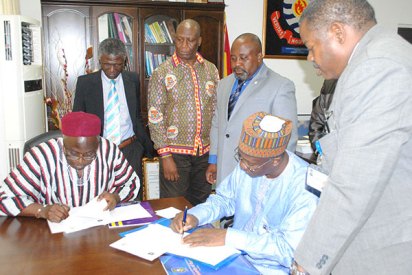 The University of Cape Coast and the University of Ilorin (Unilorin), Nigeria have signed a Memorandum of Understanding to expand the scope of the already existing collaboration between the two universities.

Speaking at the signing ceremony in his office, the Vice-Chancellor, Prof. D. D. Kuupole noted that the UCC-Unilorin collaboration had yielded fruits and making positive impacts in both institutions. He however, noted that some areas in the agreement had not been fully exploited and therefore called for commitment on the part of both universities to realise the full benefits of the collaboration.

For his part, the Vice-Chancellor of Unilorin, Prof. Abdul Ganiyu Ambali, described the symbiotic relationship between the two universities as one of the best so far which would serve as a model in Africa and beyond. He recommended the appointment of coordinators to handle aspect of the MoU that had not been fully tapped to strengthen the cordial relationships between UCC and Unilorin.

Explaining the rationale for the new MoU, the Director of the Centre for International Education (CIE), UCC, Prof. I. R. Amuah explained that it was necessitated by the strong bond that had been established by the two universities over years. He indicated that the old MoU was limited to staff, student exchanges and joint seminar however the current agreement captured joint publications, joint research and conferences. He finally added that it was the vision of UCC to establish collaboration within the West African Universities.