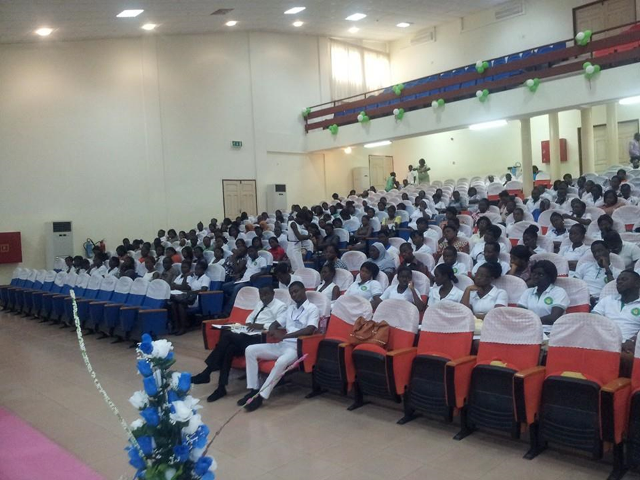 UCC Lecturer Urges Nurses to be of Good Attitude

A lecturer at the School of Nursing UCC, ,Mrs Evelyn Ampofo has urged student nurses at the school to portray attitudes that befit the profession in their practice. According to her, nurses need to portray a good and humanly attitude at the time of emergencies, during posting and their daily interaction to patients at the ward.

She made this known during the official launching of the week celebration of Nursing Students’ Association ( NUSA) which took place  on Monday 3rd March, 2014 at the UCC SMS auditorium under the theme ‘accelerating progress towards achieving millennium development goals 4 and 5 the role of the graduate nurse’.

She further stressed that the millennium development goals 4 which is concerned with reducing infant mortality and the 5th which deals with improving maternal health by 2015 will be greatly achieved if the graduate nurse is actively involved in assiduous work.

‘Graduate nurses need to develop their skills, advocate for the goals and do more research if the MDG 4 and 5 are to be realized’ she said.

The program which also doubled as the official launching of the association’s cloth was chaired by the acting Dean of the School Dr. Peter Martey Siakwa.Also in attendance were, pioneer of the school, professor Janet Gross;, lecturers of the school; Mrs. Cecilia Duodu, nursing manager at the Cape Coast Regional and Teaching Hospital, SRC president David Boakye as well as students of the school.

Pioneer of the school, Professor Janet Gross, also made it known to students that without caring which is shown in the attitude of nurses, the profession can be performed by robots. She therefore encouraged the students to internalize the core values of the profession which is accountability, moral intelligence and caring.

Speeches from various speakers including the SRC president and cultural display by a troupe from department of Music and Dance complemented the program to a successful end.