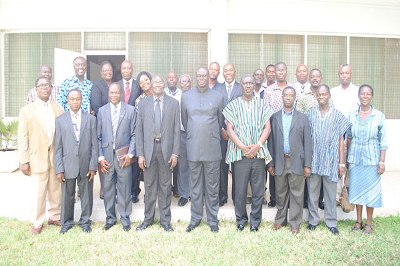 The newly-appointed Central Regional Minister, Mr. Samuel Sarpong has called for collaboration between the Regional Coordinating Council (RCC) and UCC to develop the region.

He noted that it was necessary for the RCC to impact positively on the University and therefore called for regular interactions between them to bring this to fruition.

Mr. Sarpong said this when he paid a courtesy call on management of the university at the Academic Board Chamber, North Campus. He gave the assurance to work closely with the university to the benefit of both the RCC and the UCC.

He recalled that during his tenure as the Metropolitan Chief Executive officer of Kumasi there was cordial relations between Kwame Nkrumah University of Science and Technology his office and would therefore be happy if this story could be replicated now that he is the minister of the Central Region.

He promised to help check the activities of encroachers on the university’s lands indicating that he has never compromised on such issues.

The Vice Chancellor of the university, Prof. D. D. Kuupole pledged the support of the university to help the RCC to achieve the socio-economic development of the region. He gave assurance that the RCC could count on the University for assistance in that direction.