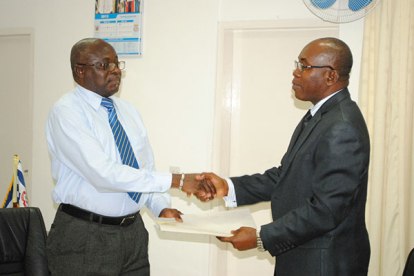 UCC to Interdict Masterminds of Fake Pay-In-Slips for Registration

The Committee of Enquiry into the Use of Fictitious Pay-in-Slips by Students for Registration during the 2011/2012 and 2012/2013 academic years have submitted an interim report to the Vice-Chancellor, Prof. D. D. Kuupole in his office.

In all, a total of 145 students fell victims of the scam for the 2011/2012 and 2012/2013 academic years. The committee recommended that 17 victims of the scam should be allowed to register subject to signing a bond to be of good behaviour in addition to payment of a penalty of GH ¢100 as compensation to the University. The other 74 would be allowed to register on the condition to sign a bond to be of good behaviour.

Prof. Buah pointed out that the motive behind the scam was to make money and further indicated that they deceived 93 students by issuing them fake pay-in-slips purported to emanate from the Agricultural Development Bank for registration in the 2012/2013 academic year and 52 students for the 2011/2012 academic year. He added that the committee noted that most of the fake pay-in-slips emanated from three branches of the Agricultural Development Bank, specifically, Makola, Gulf House and Kaneshie Branches.

The Chairman also said that the Committee observed that most of the suspects made their victims to believe that paying their fees through them would create scholarship opportunities for needy students. He also averred that some of the students fell victims of the scam because most of them were either fickle-minded or simply lazy thus making them easy preys. He indicated that none of the victims discovered the scam until the Directorate of Finance drew their attention to it.

Receiving the report, the Vice-Chancellor commended the committee for working assiduously to unearth the mysteries surrounding the case and assured them that the recommendations would be implemented. He used the opportunity to sound a word of caution to students to be vigilant by paying their fees through the approved banks and not any fictitious individual who claims to be an agent for either the bank or UCC.