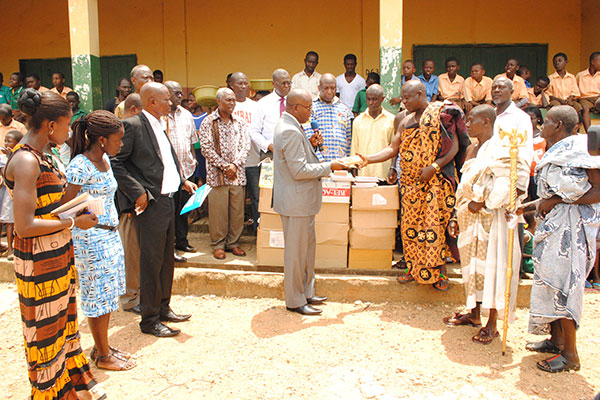 The University of Cape Coast School of Medical Science(UCCSMS) Students are embarking on a library project at Adjobue a rural community in the Eastern Region as part of their contribution to improve the falling standard of education in the area.

Adjobue a rural town in the Akyem Mansa District in the Eastern Region is currently hosting students of UCCSMS for the Community-Based-Experience and Service (COBES) Programme. The students spend three weeks interacting with the people of the town and surrounding and its communities. The purpose of the COBES programme is to give students strong community orientation and increase awareness of the interrelationship between lifestyle and health.

For the past three years, students of UCCSMS have not only educated the people on preventive health but have also contributed in addressing the social needs of the communities. One of such interventions is the library project initiated by the students to inculcate the habit of reading in the children. Even before the building project commences, the students have presented over 600 assorted books valued at several thousands of Ghana Cedis to the community at a “Feedback Durbar” held at Adjobue.

The Chief of Adjobue ,Nana Duodu Peprah Acheampong III who received the book expressed appreciation for the donation and pledged to release a parcel of land for the project. He also promised to provide sand and gravels for the construction of the library building. He remarked that “UCCSMS has not only intervened in addressing our health needs but also contributed to the overall development of this area by tackling the falling standard of education.”

In a similar manner, the District Chief Executive of Akyem Mansa District Assembly, Mr. Thom Budu and Member of Parliament for Ayirebi/Ofoase, Mr. David Oppon-Kusi lauded UCCSMS for identifying the area for the COBES programme and also pledged their support for the Library project.