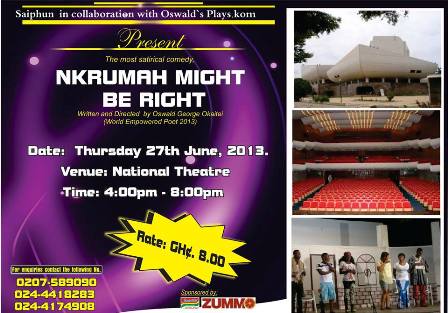 Saiphun and Oswald’s Plays.kom present the final reloaded version of Ghana’s 21st century most realistic satirical comedy, NKRUMAH MIGHT BE RIGHT! at the main auditorium of the National Theatre of Ghana. The date is Thursday, 27th June, 2013 from 5pm and the rate is only Gh 8 cedis.

The play was first staged at the Center for National Culture (CNC)-Accra and has since been reloaded with more plots and sound tracks. The play reflects Ghana’s 21st Century politics (NPP and NDC wahala) vis-a-vis Osagyefo Dr Kwame Nkrumah’s ideology.

To form part of the audience for this must not be missed comical comedy by a promising budding playwright/director/poet, Call +508 727 117, +244 174 908 or get your ticket from the front desk of National Theatre and Accra Arts Centre.