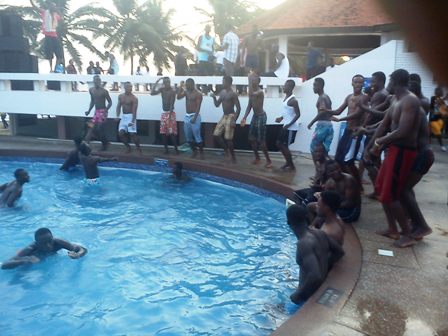 Valco Hall goes Swimming in Preparation for their Hall Week

Valco Hall, the most entertaining hall in UCC organized a pre-hall week pool party on Saturday at the Elmina Beach Resort as part of preparations towards their upcoming 21st hall week celebrations slated for March, 2013.

The event attracted students from other halls and hostels including Kwame Nkrumah Hall, Casford Hall, SSNIT Hostel Oguaa Hall among others.

The pool party as Koo Phante, the entertainment chairman of Valco hall explains was just an “appetizer” to start the fire in students for the Hall week celebrations. He calls it “the biggest pool party ever”.

Beautiful and gorgeous ladies from the “Industrial land” were outdoored as aspirants for the Face of Valco,a beauty pageant also slated for March as part of the hall week celebrations.

The sexy ladies clad in blue sleeveless  shirts and white shorts made their appearance and modeled on stage and exhibited some “walks” to show just a little of what they had to offer in the contest.

The event was ‘charged’ as people danced to Azonto tunes in different styles and had a cool swim energized by Burn Energy drink. The biggest pool party ever as Koo Phante  and his entertainment committee call it was graced by the Valco Hall President, Ishaq Dauda and his VEEP.

The event was sponsored by Coca Cola Ghana, Yess fm and Shizle studio.

Watch out for Valco at 21 Hall week celebrations and let the INDUSTRIALISTS show UCC what they’ve got.