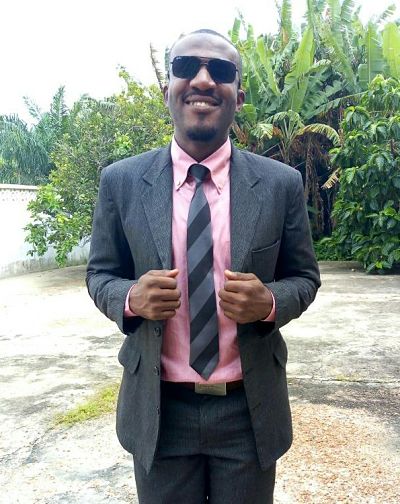 Over a Decade in ‘Total Darkness’, Carruthers Tetteh Proves Disability Can Never Be Inability (PART ONE)

Mr. Carruthers Tetteh is currently an LLB student at the University of Cape Coast. Before his second degree, he obtained a first class degree from the Department of Education, Arts and Social Sciences with English Language as his major. He became the first Teaching Assistant (national service) with visual impairment, after so many years, from the English Language Department in the 2015/2016 academic year. He shares his story about his academic journey and how he lost his sight at a tender age.

“My name is Carruthers Tetteh. I was born on 12th August and I am the first of two children- myself and my brother Roy Tetteh. I hail from Winneba in the Central Region and I am a member of the North-Gate Baptist Church, Winneba.

I lost my sight in 2002 when I was in class 5. I never had any problem with my eyes. I returned from school one afternoon with a headache and so the following day my mum took me to one of the private clinics at Winneba. The doctor examined me and gave me some injections. When I returned home, I started having boils on my body and so we had to go back to the clinic but the doctor said it was German Measles. He continued to give me more of the same injection not knowing it was going to worsen my situation. This is because I was allergic to the drug and the doctor too didn’t realize it.

Some days later, one of my aunties who was then a nurse at the Komfo Anokye Teaching hospital came down to see the situation. Knowing that it was a drug reaction, she pushed for my referral to the Efia Nkwanta Hospital. When we got to the hospital we got to know my condition was Stevens-Johnson syndrome. During this period, I was bandaged from hair to toe, my skin was peeling off and I was getting stuck on the hospital bed. It was just a terrible situation.

Luckily for me, I didn’t lose my sight at once. It was a gradual process.  It took about a month for me to totally go blind. Initially, I thought it was just a normal sickness like a headache that is relieved with a painkiller and so it would definitely go. I’m saying this because at that time I had been referred to an eye specialist and, I thought I would just recover someday. When we started going for eye checkups at the Korle Bu Teaching Hospital, I was told that I would have to do a corneal transplant which would be done outside the country, and it was extremely expensive. It was even a 50-50 chance.  They later advised that I got enrolled in a school for the blind.

And so in the following year, 2003, I was taken to the Akropong School for the Blind in the Eastern Region. It was there that I realized I had really lost my sight because I was among other visually challenged students. Even at this time, I was not really disturbed nor did I isolate myself from others or think that my world had come to an end. This was because I saw my visual impairment as a challenge that needed to be worked at in order to overcome it. Firstly, I accepted the challenge and I told myself the fact that I was blind did not mean I could not learn or compete with others. I am one person who always tries to create an opportunity in any situation I find myself. The only thing was that I had lost one out of 5 senses. I developed a spirit of consistency and determination and I was always pressing to reach my dream which is to be in a position to affect lives of other people positively.

I remember when this happened, it was a really difficult moment for my family especially my parents because I am their first child. My mum would cry, sob, and go for all night services. And my dad would move from one church to the other and would come and tell me what the pastors said- basically a spiritual attack. He would take me to men of God when the medical aspect didn’t work out.  But I did not see it as such. Because I believe that Christ is in me and therefore no weapon can fight against me. I believe that this is to make the name of God be glorified.”

The final part of this interview will be featured next week.