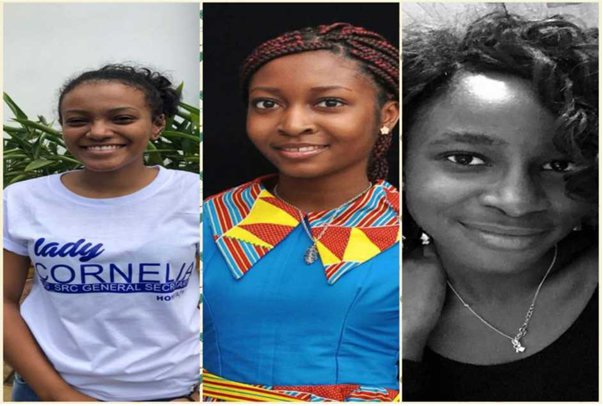 3 Ghanaian teenage girls get into Harvard, Yale and MIT

With highly competitive admit rates of 4.59% for Harvard, 6.3% for Yale and 6.9% for MIT, young Katia Maame Dufie Osei and Afia Sarpong Frimpong (both of Wesley Girls’ High School) and Isabelle Quaye (Ghana International School) managed to find their way through thousands of applicants worldwide.

What all these girls have in common is that they scored higher than 99 percent of all test takers on the SAT in the world.

Harvard University, since its inception in 1636 recorded the lowest admit rate this year. 17- year old Katia Osei has been admitted together with 1,961 students out of 42,749 applicants.
Her outstanding performance in her SAT, WASSCE and numerous excellence awards in high school placed her as one of the few Ghanaian female students to be admitted to Harvard University over the past decade on full scholarship. Additionally, she was admitted to two other Ivy League schools – Columbia and the University of Pennsylvania.

With over 35,306 applicants, Afia Sarpong has been counted among the 2,229 students who were admitted into Yale University also with full scholarship this year. Afia also made a tremendous achievement in both her SAT, WASSCE and other high school academic records to be admitted into Amherst College as well. Wesley Girls’ High School, Cape Coast can boast of a place in the Harvard and Yale Class entering in August 2018.

The Massachusetts Institute of Technology (MIT) is well known for its unrivalled engineering and technology training in the US. Isabelle Quaye, having a compelling record of accomplishment in her high school, national and international platforms, pulled it off among the few to secure her position in the most competitive US engineering colleges: MIT and California Institute of Technology. She also made it to Princeton University, which is among the eight Ivy-league schools.

With the help of AFEX Test Prep an educational enrichment agency located at East Legon, Accra, with branches in Takoradi and Kumasi these young girls were adequately prepared to excel in their college preparations and they indefatigably made Ghana proud.

Some 34 other Ghanaian students also received full scholarships to prestigious USA universities through the assistance of AFEX Test Prep. The estimated scholarship amount is about $16.2 million over four years.

“Congratulations! I am delighted to inform you that you have been admitted into. . were words that flooded decision letters of these high school graduates who are ready to fly to the US for higher education.