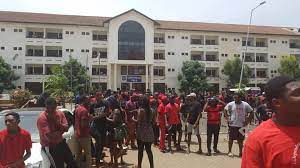 Private Hostels fees increase alarming, what is the fate of students?

Public Universities have always been overpopulated because of the huge intake of students. However, the various Public Universities, despite the difficulties try their possible best to take first-year students in the traditional halls.

This has followed a traditional practice called the Garbage-in-Garbage-out process.

Given this, it has become a big problem for students as they have to search for their hostels which I’m privy to students of the University of Cape Coast(UCC) and Kwame Nkrumah University of Science and Technology(KNUST).

For some years, it hasn’t been easy for students who cater for themselves and most parents when there is a new academic year to begin. This is because parents and students have to pay for exorbitant hostel fees in addition to school fees.

The next academic year won’t be exceptional as hostel fees were published for students to get prepared.

What triggered this article to be written is that hostel fees are increased each year. What sudden students is the fact that there are no innovations done but hostel managers have to increase various hostels for the mere fact that we’re entering into a new academic year?

Now the analysis some students were making was that, Accra is known for its high rental charges per head in a single room self-contain which is not more than 3,000 Ghana cedis. According to these students, the standards of their self contain do not meet that of Accra’s buildings but they pay more than them.

Others complained that some of these hostels are owned by some lecturers and that, they should have been in the shoes of their parents yet that is not the case.

In a nutshell, students are calling on the administration of various Universities precisely UCC and KNUST to come to their aid to help them unburden these high costs of private hostel fees. They also called on the government to build more of the traditional halls so that in the coming years this Garbage-in-Garbage-out process will be a thing of the past.

However, in support of the Member of Parliament for Amamoma-East Constituency, Hon. Ofori Henaku Daniel in his petition for the intervention of the Student Representative Council( SRC) for review should be highly taken into consideration. Because is really taken out of hands.

Published in Feature News, Opinion and Other Campuses