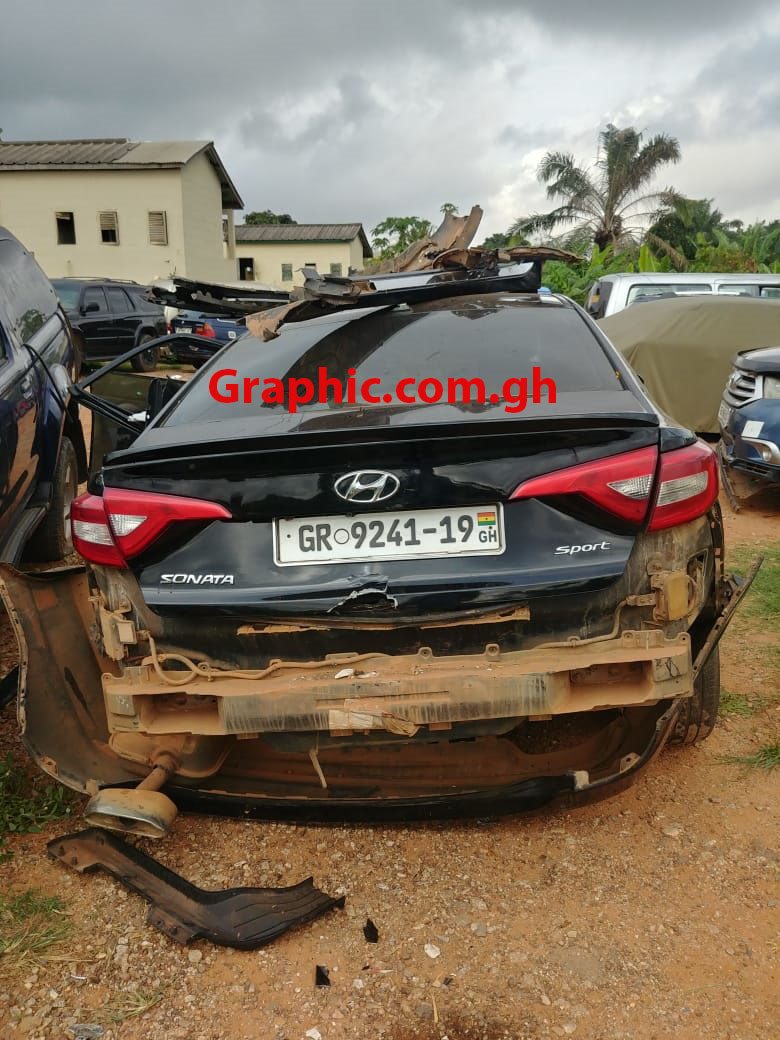 Three students died on the campus of the Kwame Nkrumah University of Science and Technology (KNUST) in two separate accidents on Saturday, March 27, 2021.

In the first incident, two students died when the vehicle they were using crashed into a tree around 3am.

There were a total of five people in the vehicle, four KNUST students and one student from the University of Ghana (UG).

The students reportedly went out to a night club and were returning to the campus.

Photos obtained by Graphic Online after the accident shows a badly damaged vehicle.

The third student died in the second incident at around 11am after falling and knocking the head on a staircase.

He is said to have gone to visit a friend when he passed out, fell on the stairs of the first floor of the Unity Hall [Continental] and hit the head against the staircase.

He was rushed to the hospital where he died.

Explaining, the University Relations Officer (URO) of the KNUST, Dr. Daniel Norris Bekoe said the first incident occurred when a car with five students ran into a tree around 3 am.

“The first incident occurred around 3am and we learnt that a car with about five occupants who are all students, one is a student of University of Ghana and four of them are students of KNUST.”
“They crashed into a tree by the roadside and two of them lost their lives.”
“One is in critical condition at the Komfo Anokye Teaching Hospital (KATH) and two other occupants are in stable condition and responding to treatment.”

“Then around 11am we learnt of another incident where a level 100 student went to the Unity Hall to visit a friend and whilst they were having a conversation, I think he passed out and fell on the staircase of the first floor and hit the head against one of the staircase and he was rushed to the Komfo Anokye Teaching Hospital, doctors tried all they could but unfortunately we lost him too.”
“We have been able to identify who the students are, we have made contacts with the parents and the parents have come to identify the students and the necessary processes are ongoing, the police is investigating the cause of the accident and when they are done, we will put out the full details.”
“Management of the university is deeply saddened by this event and we want to say we are deeply worried and saddened. We wish the bereaved families God’s guidance in this trying moments and we will do what we have to do to put out the details once the police conclude the investigations,” Dr Bekoe said.

Meanwhile, Graphic Online checks at the KNUST Police station indicate that the student who fell and died at the Unity Hall has been identified as 19-year-old Cupson Larry Leslie.

He was a level 100 [first year] Bachelor of Science student in Mathematics.

The police confirmed he went to visit a female colleague at the Unity Hall who is also a level 100 Bachelor of Science student in Mathematics and a resident of Room 7 on the first floor.

Whilst they were standing on the veranda on the first floor at Block B, he suddenly fell and sustained injury on the head and was first rushed to the KNUST Hospital from where he was referred to KATH.

He was admitted at the KATH Emergency Ward at 12:54 pm and later died at 3pm.