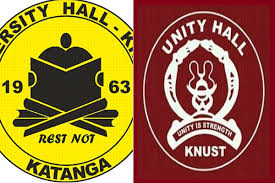 ‘We know our common enemy, and it is neither Conti nor Katanga’- Kantaga to the world

“The true measure of strength rests not in the ability to fight wars and win battles, it is the ability to withhold one’s urge at the time of anger” is the opening proverb of University Hall (Katanga) of The Kwame Nkrumah University of Science and Technology as they write in a press release to resolve issues with Unity Hall (Continental Hall).

According to the release, Katanentals Fraternity apologizes on behalf of its traditional homes and all and sundry of their actions and inactions thereby looks forward to make peace with Conti Hall as they claim;

“We know our common enemy, and it is neither Conti nor Katanga. We can now only collaborate to defeat that enemy, and not each other. We fight no more! May the spirits of Father John and Nana Aboagyewaa be our guides”

“This is not the time to play the blame game. The recognition of our mistakes and involvement in some unfortunate occurrences on campus I believe is a first step towards achieving good fraternal relationships and peaceful coexistence amongst ourselves..” it added.