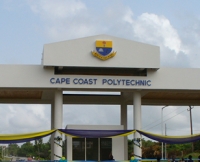 Dr Lawrence Atepor, 46, on Thursday assumed the position of a Rector of the Cape Coast Polytechnic (C-Poly) with a pledge to work hard to transform C-Poly into a world class polytechnic of choice for technical and vocational training comparable to any technical university globally.

He took over office from Mr Kobena Atombo Simpson the acting Rector of the Polytechnic in September 2012.

Dr Atepor comes from Sovie in the Volta Region and obtained his Ordinary and Advanced Level certificates from the Opoku Ware Secondary School in Kumasi from 1976 to 983.

He attended the University of Ghana Legon for one year and left for the USSR to pursue a programme leading to the award of a Master of Science (MSc degree in Mechanical Engineering (machinery Option) at the Tashkent Institute of Engineers of Irrigation and Agricultural Mechanization.

In 2009, Dr Atepor was awarded a Doctor of philosophy (PhD) degree in Mechanical Engineering from the University of Glasgow, United Kingdom.

He joined the Cape Coast Polytechnic as a lecturer in the Department of Mechanical Engineering in 1997 and had served in various capacities. He also implemented the TALIF project involving the setting up of Fluid Mechanic, Fluid Machines and Hydraulics Laboratory worth 150,000.00 dollars.

In his induction speech Dr Atepor said to achieve a world class of polytechnic of choice, the current level of human resources, equipment and other infrastructural facilities as well as the academic and administrative leadership and motivation must be transformed.

He also pledged that effective teaching and learning would be promoted among students and staff through the provision of needed facilities, regular and effective monitoring of teaching and that in due course he would establish a Quality Assurance Unit to regulate teaching, research and extension services of members of staff to ensure quality in the delivery of academic and other ancillary services within the polytechnic.

Dr Atepor further stated that many of the existing programmes would be strengthened through curriculum revision with the upgrading of some of them to degree levels by 2015, adding new demand-driven programmes including, computer science, welding and fabrication, marine engineering, fisheries, environmental studies, petroleum engineering, production agriculture, medical Laboratory Technology and Energy Systems Engineering would be developed.

He said mutually beneficial linkages with education institutions both within and outside, would be established and that the Polytechnic was already holding discussions with Aberdeen University in Scotland for Petroleum, Marine Engineering and Fisheries programmes and the Norwegian University of Science and Technology for oil and gas programme.

He added that the Polytechnic had already established linkage with the North Carolina Agricultural and Technical State University (NCAT) to run a Bachelor of Technology programme in Mechanical Engineering.

The Rector said plans were far advanced to transform the polytechnic library into a modern electronic library to promote teaching and learning and that the ICT Directorate of the Polytechnic would be strengthened and staffed with qualified personnel.

On infrastructure, he said, measures would be put in place to regularly maintain, refurbish and modernize them in addition to the construction of new ones and that the polytechnic clinic would be upgraded into a health centre to cater for the polytechnic community.

Dr Atepor said in order to execute development projects in the school, he would encourage fund raising efforts by the Council members and Alumni, re-activation of departmental income generation Committees as well as the setting up of Business Advisory Board to facilitate consultancy services.

He said a motor servicing centre would also be established by the Mechanical Engineering Department to service certain categories of vehicles like Yutong buses and Nissan vehicles through partnership with J.P Plant Pool and African motors.

The rector said he would ensure that students were able to graduate on schedule and that next year, three batches of 2011, 2012 and 2013 students would graduate.

He tasked the teaching staff to put aside the checkered past of the Polytechnic and forge ahead with the development of C-Poly.

The Chairman of the Polytechnic Council Mrs Emelia Aning congratulated Dr Atepor for assuming the high position of a Rector and asked him to be fair and firm in his duties and endeavour to operate an open door administration.

He encouraged him to follow all the principles of a good leader and ensure cordial and mutual trust among the staff and administration of the Polytechnic to enable him achieve his visions for the school.

The Central Regional Minister Mrs Ama Benyiwa-Doe also congratulated Dr Atepor and said the government attached much importance to polytechnic education and would therefore give it the necessary support and funds.