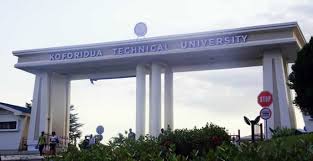 The 3rd edition of the Koforidua Technical University Students Representative Council (SRC) awards has been slated for May 12 to crown the 2018/2019 academic year.

The Koforidua Technical University SRC Awards is an annual award scheme that recognises and celebrates deserving students and corporate organisations for their contributions to the SRC, students of the university and the country as a whole.

The awards are based on achievements from January 1 to December 31, 2017.

The theme for this year’s award is: “Empowering Tomorrow’s Leaders Today”.

Meanwhile, a committee to vet nominees has been set up.

The committee, made up of reputable members of the university community, will also supervise the voting of shortlisted nominees for the various awards categories.
Nominations end on April 30, 2018.

The 3rd Edition Of The Koforidua Technical University SRC Awards (KTU SRC Awards) will be held on 12th May 2018 at the Eastern Premier Hotel In Koforidua, Eastern Region.