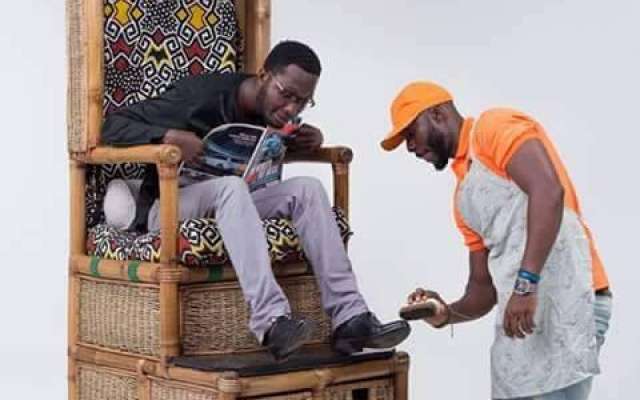 A graduate of the Kwame Nkrumah University of Science and Technology (KNUST) has ditched his degree in Theoretical and Applied Biology to pursue a career in shoe shinning.

Solomon Kwashie is the founder of Spec Shine Cobblers, but his current job is a big departure from what he initially planned of becoming. Having realized that working as a clinic manager was yielding very small returns, Mr. Kwashie set out to establish his own business – a modern day shoe shine boy, he calls it. 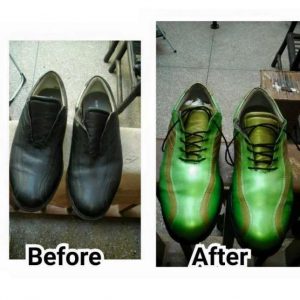 Explaining how it all started, he said his desire for entrepreneurship led him to establish Spec Shine Cobblers in 2016. “The idea came to me when I was in my final year. I was thinking if after school I had no job, I was jobless, there was nothing to do, what will I do? And I thought about the fact that everybody dies, everybody wears clothes, everybody eats food, and the next thing everybody does is wear shoes, and, especially in this part of the world, I felt there is enormous heat, so, protecting your legs becomes an essential thing to do,” Mr. Kwashie said in an interview with Class FM.

“So, I figured if I can’t do clothes business and I didn’t want to get into food business, then the best line of action for me was to get into the shoe business. So, I researched into becoming a cobbler,” he further said. 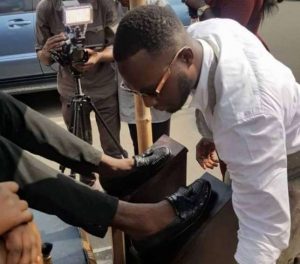 According to him, his parents are also very supportive despite the fact that he ditched his degree which he spent huge sums of money to acquire.

“I have open-minded parents who are supportive of my business, they do not tie me down,” he added. Spec Shine Cobblers is a shoeshine and leather repair business in Accra. It is into polishing, re-colouring, restoring, and fixing shoes and any other leather accessories like belts and bags. Mr. Kwashie believes shoe shinning is equally a profitable business, insisting it’s high time people began to respect those in such a profession.

“I didn’t like the way shoeshine people were treated. In Ghana, we associate shoe shining to dirty, unsophisticated and poor people but anything that earns you money should not be classified as not good enough.”

According to him, in defiance, he became a shoe shine boy “to prove to everybody else that a university degree doesn’t limit you to a job in the office. 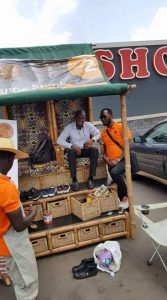 Further explaining how he made the transition from a Biology degree holder to a shone shine boy, Mr. Kwashie said: “After school, I managed clinics for 4 to 5 years with my biology degree. When I started working, my boss had one practice, and in five years, he had five practices, so, I realised I was using the prime of my youth to help somebody else build their own empire and I decided that now that I’m healthy and fit, let me give mine a shot, so I left my old job.

“I had saved up some money to make the transition. I built my own shoeshine chairs with bamboo, cane and raffia and began business,” he added.

The business has been doing well, he says, adding that he currently has four employees and has his bamboo-made shoeshine chairs positioned at the Achimota Mall, Airport residential area and the Nyaho hospital street.