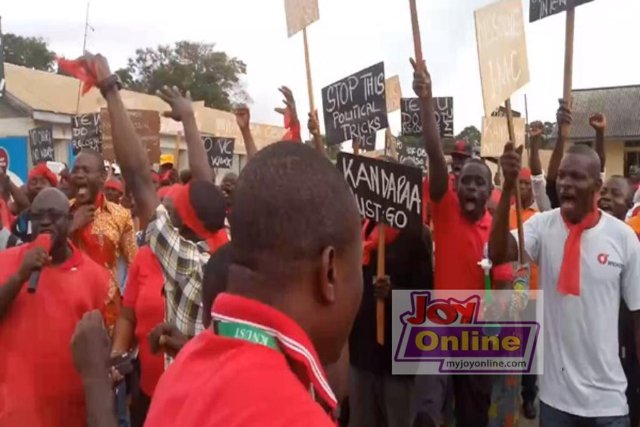 Members of the Teachers & Educational Workers Union of Ghana (TEWU) and lecturers of the Kwame Nkrumah University of Science and Technology (KNUST) have hit the streets to protest the government’s dissolution of the school’s governing council.

TEWU and the lecturers are irked by the government’s decision and want them to reverse same. They have already withdrawn their services.

They have hoisted placards that read, “Stop these political tricks,” “No IMC in KNUST,” and “No government Interference,” among others.

The University Teachers’ Association of Ghana (UTAG), has backed the strike by the local branch on KNUST campus.

UTAG has also directed its branches across the country to meet with all members to decide their next line of action, it is expected that they will join their KNUST colleagues to withdraw their services in solidarity. Academic freedom is under threat, they argue.

Members of the teacher union say they do not recognise an Interim Management Committee the government has put in place to man the affairs of the university for three months.

Meanwhile, the National Council for Tertiary Education (NTCE) has also reportedly asked the Vice Chancellor, Prof. Obiri Danso to step aside. The NTCE, according to Deputy Education Minister Dr. Yaw Adutwum, wants him to make way for the interim governing council to take over the administration of the university.

Some Minority Members of Parliament have also slammed the government’s decision to dissolve the governing council and asked the VC to step aside. MP for North Tongu, Sam Okudzeto Ablakwa, told Joy FM’s Super Morning Show that the government should “apply breaks” as to how it is handling the issue.
Violent protests

Last Monday, students of KNUST embarked on a demonstration to protest what they describe as oppression from university management.

The students say recent policies of the management, are inimical to their interests and also, the personnel of campus security are abusing them.

The school has since been shut down indefinitely after the students vandalised school and private property during their demonstration. The government has directed the interim council to reopen the school in 14 days.