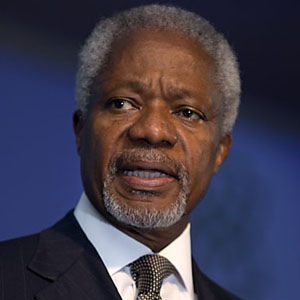 Former Secretary General of the United Nations Kofi Annan has urged governments, particularly in Africa, to uphold peace, justice and the rule of law and respect for human rights at all times. He said these were the key ingredients for the true development of any society.

The Former UN Secretary General, who was speaking during the launch of his book in Accra yesterday, said it was heart warming to note that democracy was gradually gaining ground all over the world but added this was not enough.

The 383 page book, entitled, “Interventions, A Life in War and Peace,” gives an insider’s personal account of the UN, including the achievements and challenges of the organisation.

The former UN boss said he felt the need to inform the world about the workings within the UN and what went into ensuring world peace and comfort.

He expressed hope the book would encourage young people to get into public service.