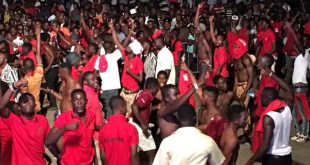 By Abdul-Karim Mohammed Awaf on October 8, 2018

Embattled executives of the Students’ Representative Council (SRC) of the University for Development Studies (UDS) in Nyankpala have allegedly led a group of rowdy hooligans to assault journalists during a matriculation event in the school Saturday.

The journalists were invited by authorities of the school to cover the matriculation event at the school’s squalid campus in Nyankpala.

The students suddenly surrounded the journalists and violently attacked them, over the sex party story, as they were preparing to leave the campus after the event.

Alhassan Washeed, a journalist working with network broadcaster UTV, and his camera crew were brutally manhandled and their motorcycle destroyed by the SRC and its gang.

The reporter said the attackers questioned him about a sex party story that was first reported by Starr News and carried widely by other networks. According to him, the students’ body was angry his network also ran the story on air without seeking comment from them.

The students’ body of the university is currently under mounting pressure after accusations emerged last week that they organized and supervised over a sex to welcome freshers.

The accusation leveled by multiple students of the institution who allegedly attended the said party indicated that many people were seen having sex in the crowd.

Religious bodies on campus blasted the SRC and called for sanctions against the executives after obscene photographs of the supposed party were leaked on social media.

School authorities then desperately began to scramble for answers after Starr News report on the allegations triggered anger and confusion on campus last Friday, and since then, the SRC executives have been angry with the press for widely reporting on the matter.

Abdul Washeed, narrating further to Starr News said they were packing their gadgets to exit the campus after the ceremony when a group of angry looking young men surrounded them and asked the team whether they were working with the UTV.

He said the young men retreated meters away from the scene when they answered them in affirmative. Washeed said the men returned only to launch physical attacks on his cameramen and struggled with them for several moments trying to seize and destroy his gadgets.

More attackers, according to the reporter, joined the attack but an intervention of some lecturers quelled the assault. The reporter identified the attackers as members of the SRC, led by its president, Alhassan Abukari Sadiq Kilwa.

“They just ransacked our bike; they spoilt the dashboard and took some pieces out of it. The students were asking whether I have accreditation to be part of the programme, and I was like ‘what will I be doing there if I’m not invited’, so it was then that some (members) of the administration came and asked the students to stop what they were doing, and that it wasn’t pleasant at all, it was demeaning to the image of the school,” Washeed told Starr News, adding, “so currently as we speak, my bike has been vandalised”.

Washeed disclosed he was writing a report about the attack to be forwarded to the management of his network in Accra and would file a complaint with the police afterward. The matter has also been reported to the Journalists’ Association in the region.

The school was not immediately available for comments, about the students’ misconduct in the impoverished university.

GJA, Media Organizations Angry
The unprovoked assault on the journalists has courted the ire of the Ghana Journalists Association in the region. The GJA condemned the assault as a “blatant attack on press freedom.”

A statement issued by the regional president, Caesar Abagali, further described the attack as “primitive, barbaric and backward” which must not be encouraged.

Abagali, rebuking the misconducts of the student said, they “are even more surprised that students who are in the school to learn and whose parents are toiling to pay fees are rather concerned about organizing sex parties other than exploring employable and business opportunities.”

The association said it cherished and respected the long working relationship with the UDS and advised authorities of the school not “sit idle and allow few indiscipline students to drag the institution’s name in the mud.”

The GJA is, therefore, demanding for “unqualified” apology to be rendered to the journalist and his crew and also replace all damaged properties. It also called for immediate arrest of the SRC president, Sadiq Kilwa.

“We are giving the UDS authorities seven days to swiftly respond to our demands so as not to mar the long working relationship between it and the media”, the statement cautioned.