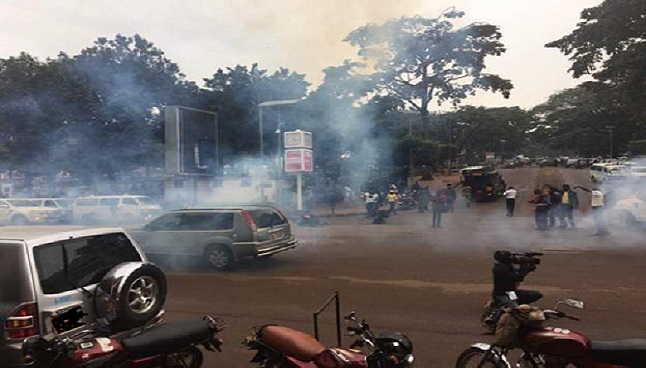 University of Education Winneba (UEW) has been closed down indefinitely following intensed protest by students  on Thursday morning for the reinstatement of some dismissed lecturers . The protest started from Tuesday.

According to news item sighted by choicism.com on 3news.com, the Police fired warning shots and teargas at the in a bid to push back student protestors on Thursday morning.

Personnel from the Formed Police Unit called in as reinforcement have clashed with the protesting students who are throwing stones in response to what they have described as police highhandedness in the peaceful protest.

Students are destroying school properties and pulling down billboards on campus, a witness to the scene reports.

“There is teargas everywhere and everyone is running helter-skelter,” the witness said a while ago.

Eight warning shots were initially fired by the Winneba Police at the Faculty of Educational Studies, close to the university canteen as the protestors moved there to rally their colleagues to join their #BringBackOurLecturers campaign which has garnered steam since Tuesday, the witness added.

The witness who spoke on condition of anonymity said the teargas were fired into the faculty building where some lectures were ongoing at around 9:00am Thursday. They also fired some into the canteen and into the bushes where some of the protestors took cover.

The protestors were said to be chanting their popular refrain ‘Bring Back Our Lecturers’ as they moved round the faculty building where some students were in their lecture halls.

The action of the police has incensed some students of the faculty who have started massing up around the Finpa roundabout close to the university administration, ostensibly to protest the police ‘highhandedness’ in handling the situation.

Some of them say they have been angered by the fact that the injured, which included food sellers, were not part of the protest