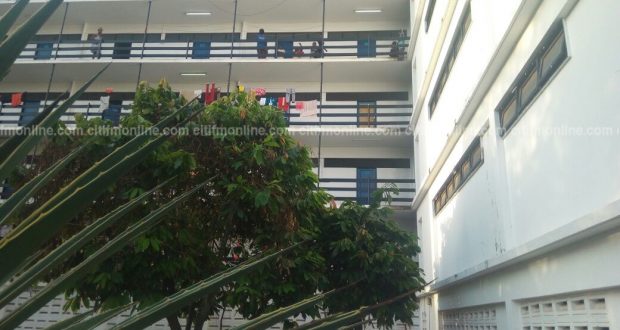 A female student of the University of Ghana has died after falling from the fourth floor of her Akuafo Hall residence.

The student, whose name has been withheld is said to be in her final year and was a student of consumer science. It is unclear what may have caused the fall.

Porters at the hall found her on the floor on Wednesday dawn, with severe head injuries.

The police were invited and helped take to the University Hospital. When Citi News’ Caleb Kudah got to the scene, a pool of blood was seen on the floor where she reportedly fell.

A porter around the hall who spoke on condition of anonymity told Citi News, “Around 4.45am we were at post and we heard a sound from outside, so my partner and I went outside to check what was happening but we didn’t see anything so we thought it might have been a car so we returned to post.

Later, some students from the first floor came back to tell us they had seen a body lying down on the floor. So we quickly rushed there to see and it was true. We called the Legon security and the police and they came for her body.”  “As at now we don’t know what may have caused this. She is now in the hospital. We saw her lying down and bleeding from her head. Such cases involve investigations so we didn’t want to touch her.

We could see that the head was broken. We are all waiting to hear from the doctor.”  Unconfirmed reports suggest it was an act suicide, but some some of her friends who spoke to Caleb Kudah said she had been suffering from bipolar disorder. Meanwhile, hospital sources say she was dead upon arrival with deep cracks on her skull.