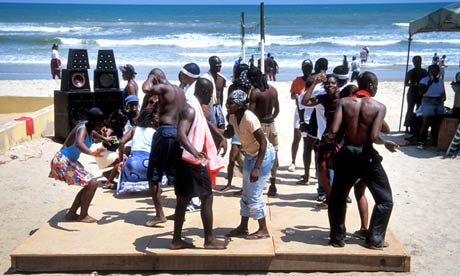 Sundays will never be the same again…with most of the tertiary institutions resuming in a couple of weeks. Beach parties are going to be a thing of the past for some students as the Dean of Students of the University of Ghana (Legon) declares it illegal at a meeting with JCR executives on the issue of beach parties which usually climaxes the various hall weeks in Legon.

The Dean said these beach parties, will from next semester not be affiliated with the University of Ghana. This is due to the time in which the beach parties commence. Some of the parties start rather late and students usually return in the early hours of the morning.

He also cited legal issues as part of the University’s various reasons not to indulge in the organization of these beach parties. He continued that  when students go for such events and suffer any harm, the university takes full responsibility and may even lead to a court action.

The Dean of Students also made it clear that the behavior of students at the beach parties leave nothing to be desired. Students get drunk and indulge in mischievous things during these parties not to mention the kind of clothes they wear to the event.

Death also played a major part on this issue with reference to the death of a student during one of the hall week celebrations last semester and also the reported death of students of Knustford also prompted them to take a stand.

The Dean made the organizing secretaries of the various halls aware that the University does not want to see buses thronging campus on Sundays waiting to convey students to the beaches.

In a short interview with the Legon Hall Organizing Secretary he said, “The University is not cancelling beach parties outright but is taking a stand, hence beach parties could be allowed with approval from the Hall’s Administration. This is because the school never gave authority for these beach parties to be organized”.

The meeting of the Dean of Students with the JCR executives of the University came off on January 20, 2014.