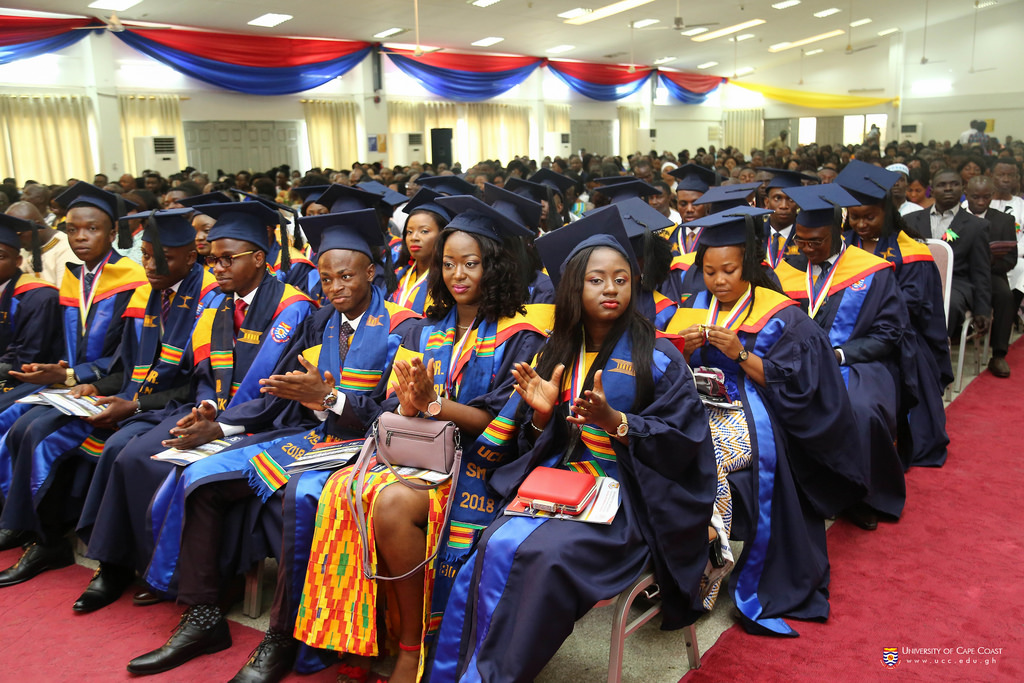 By Abdul-Karim Mohammed Awaf on September 27, 2018

A total of 5, 727 graduands of the University of Cape Coast (UCC) have been presented with certificates, diplomas and degrees at the Second to Sixth Sessions of the 51st Congregation currently ongoing at the University.

Collaborations and International Relations
On collaborations and international relations, he said in order to open new gateways for knowledge, research and academic exchange. He indicated that, the Directorate of Research, Innovation and Consultancy (DRIC) through the School of Agriculture was coordinating the implementation of the Academic Mobility Project (ACADEMY) with sponsorship from the European Union. “The ACADEMY Project seeks to provide scholarships for the study of specialised Masters/Doctorate Degree programmes in various disciplines in the partner Universities and also provide capacity building opportunities for staff of partner Universities,” he explained.

Prof. Ampiah reported that the Directorate of Academic Planning and Quality Assurance (DAPQA) collaborated with 15 universities both in Europe and Africa to respond to the 2018 KA2. He said the project was aimed at bringing together the consortium to work together to improve quality assurance systems in African universities.

Awards
In terms of awards the Vice-Chancellor said UCC received an award from Kennesaw State University, USA for being its best partner. He mentioned that UCC Sports Team won the Totem Trophy with 38 gold medals during the 25th GUSA Games held at the University for Development Studies, Tamale. The Vice-Chancellor announced that UCC Debators’ Society emerged the overall winner of the 2018 edition of the Africa Debate Championship, which was participated by universities from Ghana, Nigeria, Zimbabwe and Sierra Leon.

Research Activities
On research activities, the Vice-Chancellor said DRIC continued to put in place diverse but complementary interventions in the area of research. He noted that DRIC in conjunction with the Office of the Vice-Chancellor officially launched the maiden research report and Industry and Innovation Unit in February 2018. He indicated that as part of the launch, a workshop and an innovation fair were held for industry players.

“With the knowledge and competencies you have acquired, I challenge you to have big dreams, to be pioneers of innovations that can change Ghana and the world at large,” she urged them. She told the graduates, that the days of excuses were gone and, therefore, intellectually endowed young men and women of their calibre were needed to turn the future of the country around with their talents.

Be Agents of Positive Change
Mrs. Thompson reminded the graduands that, the future of Ghana in particular and the world in general was in their hands so they should do everything possible with the knowledge they had acquired from UCC and their God-given talent to make a positive change as they move to the next stage of their life. “I have no doubt that some of you seated here under the sound of my voice are capable of making the aspirations of our country become a reality,” she indicated.

Mrs. Thompson urged them to be worthy ambassadors of UCC wherever they go. She used the opportunity to encourage them to take keen interest in alumni activities and reminded them to give back to the University.

Published in Do not use me (Untick me)