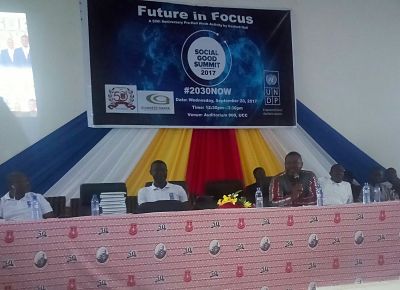 The all-male hall of the University of Cape Coast, Casely Hayford Hall, together with the United Nations Development Programme (UNDP) has held a pre hall week seminar in anticipation of the hall’s 50th anniversary.

The programme which was dubbed “Social Good Summit 2017” had the aim of looking at what the youth can do to contribute towards national development and also to create awareness of Casely Hayford Hall’s 50th anniversary.

Speaking on the topic Sustainable Development Goals: The Role of Students, an Economics Specialist from UNDP, Mr. Kordzo Sedegah, mentioned how students could in their own way help in achieving the sustainable development goals (SDGs) after he had taken the students present through the 17 SDGs, its background- from when it was Millennium Development Goals (MDGs), its formulating forces, elements and the purpose for establishing the goals.

Mr. Sedegah stated that students either as individuals or groups could bring their quota to bear in the quest to achieve the SDGs by creating awareness, delivering technical expertise, modeling behaviours that would help in making the SDGs see the light of the day by 2030 which is the SDGs target year.

He further admonished that students mobilize people for collective action by developing their skills through volunteerism and this could help achieve the SDGs.

A Communication Analyst from UNDP, Mr. Owusu Bossman, also touched on the various ways in which students could prepare themselves in order to develop their career. He hinted that in building an ideal career, students need to first assess themselves to know what their best they are good at with regard to their interests, skills and abilities.

“When it comes to a career, it begins with the basics-self assessment and it has to do with your interests. There are many situations where we have had people who have been to Medical School, Law School and the School of Engineering and have actually entered into the practice but eventually have found themselves outside the discipline for which they received training,” he said.

Mr. Owusu urged that in order for students to find satisfaction in their career, they ought to know what their interests are, and what sparks them. He stated that, “there are certain things we do that give us pleasure, even today. We may not receive payment for them but we know that when we put ourselves into that we find joy in delivering on it.”

He further added that students, in building a sustainable career should explore further in their respective field and build themselves further by poising what they enjoy doing, what they are good at and their values.

“In exploring a career, you have to balance your interests, your skills, personality, your values and evaluate career trends. Build yourself up and have a certain timeline. Don’t be in a rush,” Mr. Owusu advised.

The programme was climaxed with an official launch of the Casely Hayford Reloaded 50th Hall Week celebration with the hall president, Mr. Isaac Boateng advising members of the hall to ensure a peaceful celebration.

The hall president disclosed the theme for the hall’s 50th Anniversary Celebration as, “50 Years Growth of Great Casely Hayford Empire, Reflections and Projections Towards National Development”.

Also present at the programme were a senior hall tutor, Dr. Edem K. Amenumey, who chaired the programme, other representatives of UNDP, senior members and executives of the hall, students from the Ghana National College, and the University Practice Junior High School.