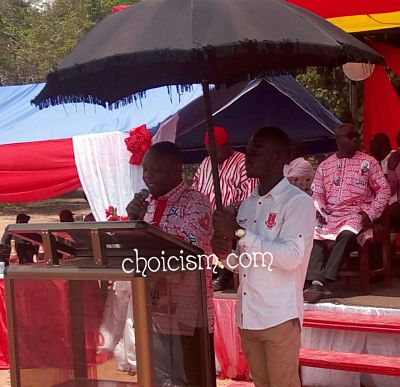 Over the years, Casely Hayford Hall has had a number of incidents muddying some of its week celebrations; however, this year’s hall week celebration of the all-male hall of the University of Cape Coast recorded no such incidents.

It is on this note that the Pro Vice-Chancellor of the University of Cape Coast, Prof.  George K. T. Oduro, has commended the hall‘s council, its JCRC Executives and planning committee for organizing a peaceful annual hall week celebration as the hall climaxed its Week Celebration with a grand durbar on Saturday, 1st April, 2017.

Speaking at the Grand durbar, the Pro VC, who is an alumnus of the hall, remarked that “It is highly commendable that, on a whole, the 50th Hall Week celebration has been devoid of the uncouth and ferocious activities that characterized previous Hall Week Celebrations such as mounting unauthorized road blocks, intimidating innocent drivers and banging on vehicles, public display of physical nudity, invasion of sister Halls of residence, stone throwing and other violent acts.

He thus admonished this violent -free Hall week celebration is continued by the hall in the years to come to aid the rekindling of the image of the hall.

“The absence of these acts of indiscipline in this year’s Hall Week celebration, I hope, opens a new chapter in the image reclaiming strategies of the Great Casely Hayford Hall”, Prof Oduro stated.

Prof Oduro also advised that, “The non-violent celebration of the 50th Hall week this year should be consciously sustained to serve as a reference point for other Halls”.

He again called on Casfodians to imitate the values of Joseph Ephraim Casely-Hayford whom the hall was named after. He reiterated that J. E. Casely Hayford was a man of integrity, thus hallers of Casely Hayford Hall should emulate him.

“It is important that we reflect on the virtues of J. E. Casely-Hayford after whom the Hall derived its name. This is because in our tradition as Ghanaians, we believe that a name is an edifying emblem that has implications for the success or failure of people.”

“I challenge Gentlemen of Casely-Hayford Hall to remember that the man J. E. Casely-Hayford was visionary, intelligent, decent, courageous, truthful and above all, ‘no nonsense man’”, he added.

The 50th Anniversary of Casely Hayford hall saw a number of cultural displays and courageous parade by some traditional councils of the hall, other sister halls; and the Airforce Cadet Corps of Casely-Hayford Hall at the Grand durbar.

In a remarks to the great parade display by the Hall’s Cadet Corps, Ft Lt Owusu Ankrah of the Airforce Base, Tarkoradi , stated that  “ the turnout and skills displayed by  the Air force cadet corps of this hall is outstanding  and could come top at any drill competition’’.

He further reminded the hall’s cadet corps that the training being offered them is to inculcate a sense of patriotism, discipline and teamwork in them. This, he said, would enable them to be better disposed to offer quality and dedicated service to the country.

The programme which was chaired by the Vice Dean of Students of UCC, Dr. Eugene K. M. Darteh saw in attendance some senior members of the hall and other alumnus of the Hall including Prof Osei Kwarteng of the History Department of the university and Nana Obura Asankoma Ansa, the chief of Ankaful Traditional area.