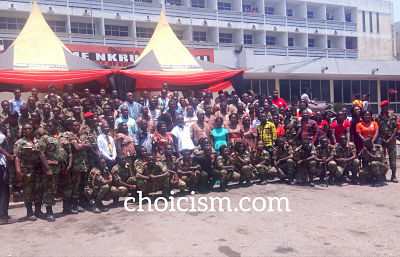 The Kwame Nkrumah Hall (KNH) of the University of Cape Coast has launched its 20th Anniversary Celebration as they hold a parade to honour Osagyefo Dr. Kwame Nkrumah.

The launch which took place on Thursday, 21st September, 2017 at the hall’s forecourt was characterized with a great parade display by the hall’s cadet corps and the Osagyefo Regimental Band leaving all present at the event with no option than to appreciate their performance.

An elder of the hall, Mr. Joseph C. Sefenu, who is the chair for the planning committee of the Hall’s 20th anniversary, stated that it has become a custom for the hall to celebrate Osagyefo Dr. Kwame Nkrumah on his birthday each year and thus the hall will continue to perform that duty.

“The hall already has a tradition to commemorate the birthday of Osagyefo Dr. Kwame Nkrumah, the first president of the Republic of Ghana and after whom this hall is named,” he stated.

He explained that this year’s event has seen a new addition as the hall’s 20th anniversary launch has been purged with the celebration.

Mr. Sefenu applauded the cadet and band for their outstanding performances.

“I think that for this two groups I have the special permission of the hall elders to congratulate you on your smart turnout and performance,” he remarked.

The launch was officially done by Prof. Atta Britwum, the first hall master of the Kwame Nkrumah Hall   who is also a former Dean of Students of the University of Cape Coast.

Prof Britwum, in his speech acknowledged the great achievements of Dr. Kwame Nkrumah in the development of Ghana and Africa as a whole.

He added that, “we have had various administrations that have followed after him and his record has remained a target even where people don’t mention it that people have aimed at reaching. Now that has not been reached and we are hoping to be reached and also surpass.

Prof Britwum disclosed the mantra for the hall’s 20th anniversary as “KNH at 20:Taking Over”.

In an address by the Hall Master, Mr. David C. Adukpo, he called on all stakeholders of the hall the take part in the process to enable them have a successful celebration.

“As we start this process, I want to invite all of us to come on board to join hands with the planning committee chaired by Mr. Sefenu to ensure that come next year March, we would have a grand celebration. The process is going to be set into motion today,” he stated.

He acknowledged the hall’s administration for their support and dedication towards the growth and development of the hall.

The Hall Master, in a remarks to the display by the cadet Corp, commended the ‘men’ for their brilliant display.

“Our tradition that was clearly demonstrated to us by the performance of the cadet has ensured that we are the pacesetters and also displayed the love and the unity that exists.”

Kwame Nkrumah Hall’s week celebration comes of next semester, in March 2018 with a number of scheduled activities to be organized by the hall.