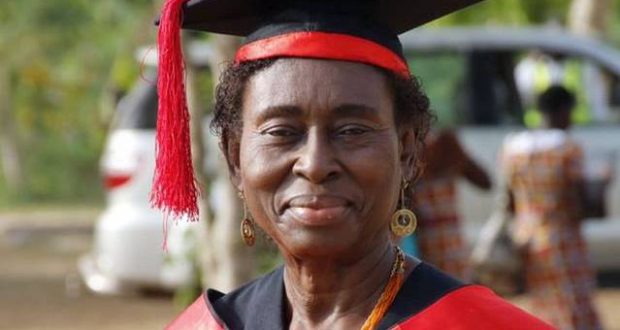 It was all joy when colleagues, relatives and friends gathered over the weekend at the University of Cape Coast (UCC) for the school’s 49th graduation ceremony.

Graduands were called up one after the other to the dais to be congratulated by school authorities on their feat. Mrs. Chris Dadzie, probably received the loudest applauds when her name was mentioned.

She is 70, and was graduating with a Master of Arts degree in Governance Democracy Law and Development. Ms. Dadzie was among the very few significantly older persons to have successfully completed the program.

For one who began her education in the 1950s, it must have been a long way coming.

Having served in various capacities in the areas of governance and law for over 4 decades, Ms. Dadzie’s drive to pursue higher education in that area could only be seen as her determination to do much more for the country.

She told citifmonline.com that, “I was inspired by the desire to enhance my knowledge on governance and development generally towards advocacy and other interventions for my human rights work. One person who encouraged me to join and stay through this programme at UCC instead of other places was Roseline B. Obeng of blessed memory.”

A retired Army Captain, Chris Dadzie comes across as a purpose driven individual whose quest for knowledge to better the lots of persons she assists cannot be easily dampened.

For her, the challenges associated with pursuing the program at the University of Cape Coast did not bother much about the fact that she was advanced in age, but of the mode of teaching.

“Age was not an issue, at least I wasn’t aware of one. There were a number of even older people in my class. Maybe it was an issue because I (plus a few of my mates) didn’t understand why we should be taught like ancient school pupils without the expected level of engagement in discussion of the topics we had expected.”

Her major surprise throughout the program was how teaching and learning appeared to be a little behind modern ways of doing so; writing dictated notes, limited internet library facility and getting supervisors for long papers.

“The challenges were many; limited consistency in the system for imparting knowledge. For instance, irregularity of lecture times, tutors and even classrooms rather old fashioned ways of long periods of writing down dictated notes for some of the subjects, highly limited internet library facilities, some grave issues with obtaining supervision for required long paper, definitely the feeling that students, even at that graduate level, are simply expected to take instructions, since suggestions and/or protests about some of the above issues were not condemned or met with threats of victimization.”

In the face of these rather gloomy and tough circumstances, the Holy Child Second old student (1959 – 1965) today, is a proud holder of a Master of Arts degree, adding to her already impressive academic and professional achievements.

It is worth noting that Ms. Dadzie obtained her LLM certificate in 1968 and became a Barrister at law the following year.

After almost a decade serving as a Captain in the Legal Directorate of the Ghana Army (1970 – 1979), she has also served as the Legal director, Public education of the Commission of Human Rights and Administrative Justice (CHRAJ) between 1993 and 2007, and is recognized as one of the few people who helped to set up the Commission.

She is a past president of the International Federation Of Women Lawyers (FIDA).