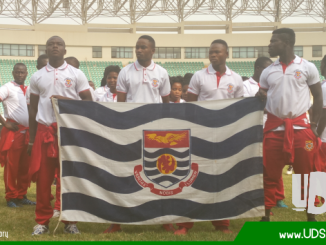 By Abdul-Karim Mohammed Awaf on January 8, 2019

The Vice-Chancellor, Prof. Joseph Ghartey Ampiah, who officially opened the Games, welcomed contingents from the competing universities to the University of Coast. Prof. Ampiah said the unique and enormous role sports participation played in the life of every individual could not be under estimated. He prayed that the athletes would exhibit best talents in the sporting disciplines they would be competing in.

Prof. Ampiah called on the sports men and women to be disciplined adding, “ I humbly appeal to you to refrain from the recent incidence of acts of violence that we have witnessed on some campuses including your younger ones in the senior high schools”.

The Vice-Chancellor congratulated all the participating institutions especially, University of Health and Allied Sciences which was featuring in the competition for the first time. He also commended the Organising Committee for ensuring the successful commencement of the games.

In his address, the Ag. President of GUSA, Dr. Charles Domfeh, said Ghana could only make headways in sports if universities were provided with standard sports infrastructure. He noted that the universities in Ghana had most of the best sports men and women the country could recruit people for the national teams as it was being done in most advanced countries. He commended government for its decision to situate some of the sports infrastructure in university campuses for the 2023 All African Games.

Dr. Domfeh further announced that GUSA would participate in the upcoming Fédération Internationale du Sport Universitaire (FISU) Games from July 3-14, 2019 in Napoli, Italy. He, therefore, appealed to corporate institutions and individuals to support GUSA to represent Ghana in the competition.

The Omanhene for Oguaa Traditional Council, Osaberima Kwesi Atta II performed the official kick-off for the opening match between UCC and UPSA which ended in 1-1 draw.