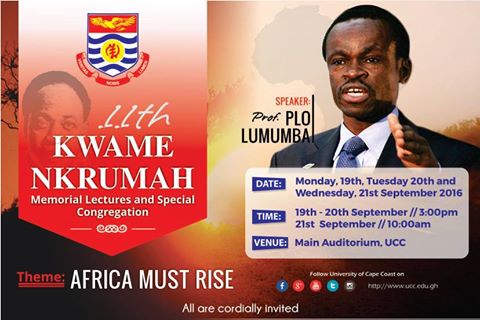 The Director and Chief Executive Officer of the Kenyan School of Law, Professor Patrick Loch Otieno Lumumba, has stated that African scholars have great ideas to change the African economy for the better.

Prof. Lumumba said that there are great economic ideas from different fields in the various universities in Africa which are untapped because African leaders have failed to utilize these ideas.

“The African academic and the African scholar is busy, active and positive. The only tragedy is that the ideas that they generate is never consumed by the political class.”

The professor said this at the 2nd day of the 11th Kwame Nkrumah Memorial Lecture Series of the University of Cape Coast dubbed “Africa Must Rise”  held at the university’s Main Auditorium on Tuesday, 20th September, 2016.

Speaking on the topic “Economic Re-orientation”, Prof Lumumba advised that in order for Africa to  re-orient her economy, Africans must begin to use science and technology.

He again added that Africa must concentrate on the type of education that helps to manipulate and utilize her resources in order build a good economy and in turn enable her compete with the outside world.

The Professor of Public Law also pointed out that Africans must do away with corruption in order to re-orient their economy, because corruption has held Africa back.

The Chancellor of the University of Cape Coast, Sir Dr. Sam Esson Jonah was the chairman for the programme.