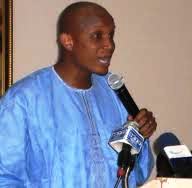 Mr. Mustapha Hameed, a lecturer at the department of Religion and Human Values, UCC has tasked students to rekindle their spirit of involvement in issues of national interest and development.

Addressing a cross section of students at the Valco Hall on Tuesday, 12th March, 2013 as part of the Hall’s 21st anniversary celebrations, Mr. Hameed beat home why it was important for students to show interest in the nation’s development.

He stated that students of this era have allowed themselves to be manipulated by political leaders and the way forward was for students to bury their ethnic, political and all other differences on issues of national interest and always put Ghana first.

He then challenged student leaders of the SRC and LNUGS to discipline themselves in order to develop the capacity to reform public issues and to make their voices heard as they represent an integral part of the nation.

“I have travelled round the world and I have never seen a more peaceful and beautiful country like Ghana. If God will ever create me again, I will want Him to create me again, again and again a Ghanaian” he said in a call for students to be patriotic.

The seminar was also addressed by Mr. Joseph B. Danquah, a lecturer at the department of Sociology and Mr. Winde Ansah an Entrepreneur. In attendance at the event was the hall master, the senior hall tutor and the hall bursar.