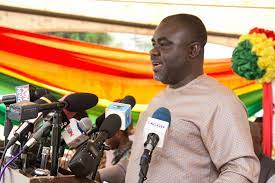 Cape Coast airport to be constructed before the end of second term- Hon. Kweku Asiamah promises

The Transport Minister, Honourable Kweku Ofori Asiamah guarantees the people of Cape Coast full completion of the airport before the end of Akuffo Addo’s Second term of four years of tenure.

“I am making a firm promise that by the end of the 4 years, the airport would be built,” he said.

According to the Minister, the promise made by the president to construct an airport and a harbour for Cape Coast were not mere words but one which is due on course.

However, during his talk with the traditional authorities of the Central Regional House of Chiefs, Honourable pronounced to them that viability studies are in progress to discover the for construction.

“The president made a promise to build an airport in Cape Coast and the Western Region and we are committed to it. Feasibilities studies are ongoing to ascertain the appropriate site for the project,” he said.

Also, he stated that the successful completion of the airport will aid in tourism and other related activities.

“The tourists could just land in Cape Coast or Takoradi to transact their businesses or tour our cities”.

Moreover, the set up of the harbour according to Kweku Asiamah was seen to be constructed in the first term of office for the fishing harbours in Gomoa West, Moree, Gomao Fetteh and Senya Bereku and other places.

In view of this, he declared that there will be more for the fishing communities as one is ongoing at Elmina and two other fishing sites at Ekumfi and Mfantseman.