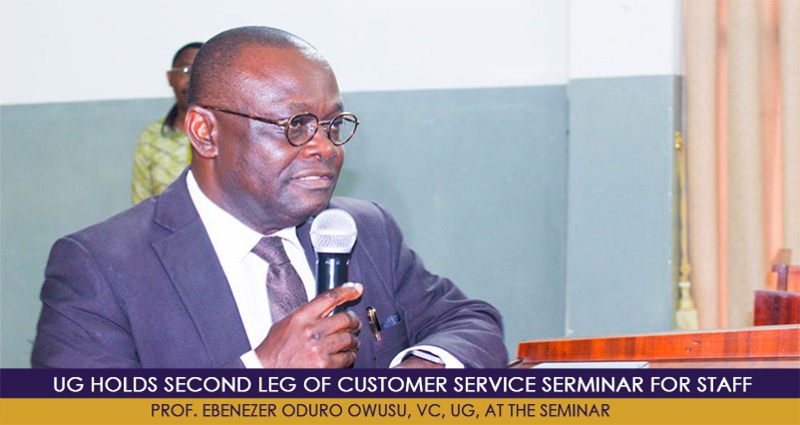 The Vice-Chancellor of the University of Ghana, Prof. Ebenezer Oduro Owusu has called for the classification of universities in the country spelling out different conditions of service.

According to him, there could not be an equal measure for all the universities, saying that the universities could, for instance, be classified into Tier One or Two or top or medium.
Stratify

Prof. Ebenezer Owusu said this in Accra when the acting Executive Secretary of the National Accreditation Board (NAB), Dr Kingsley Nyarko, paid a courtesy call on him.

In the US for instance, he said there were Ivy League Universities such as Harvard and MIT while the UK had top universities including Oxford and Cambridge.

Pride
“These are the pride of the countries,” Prof. Ebenezer Owusu said.
“If Ghana is having so many tertiary institutions, 240, we cannot lump all of them to together and say we are going to have unified conditions of service of all the universities.

“For Christ sake this cannot happen. When you do that you are punishing certain universities and given undue advantage to other universities. Here in the University of Ghana, our criteria for promotion and the kind of demands that we make on the staff are far higher, probably times 10 or 20 than what others demand. But if we say that a professor is a professor and so conditions must be the same, remuneration the same, everything the same you are going to collapse the premier university,” he said.

NAB
For his part, Dr Kingsley Nyarko said, among other things, that the mandate of the NAB was accredit institutions and their programmes and also to ensure the maintenance and promotion of quality standards within the tertiary education system.

He said he assumed office he had realised that the NAB had done a lot in terms of the promotion of quality standards in the tertiary education system.

“But I think that together with my team we still have to add to the gains that were chalked up by the immediate-past executive secretary, Mr Kwame Dattey. Assuming the seat, our principal vision is to make sure that the NAB is driven by information and communication technology (ICT),” he pointed out.

Dr Kingsley Nyarko said the board wanted to have ICT-driven accreditation and quality assurance within the tertiary education system so that “we can have some form of effectiveness and efficiency,” he said, adding that board wanted to minimise paper work.

“At least if you have the place fully automated, you save cost, bring about effectiveness and efficiency and timeliness regarding the kind of things that we do”.

Credentials
He said with the collaboration of tertiary institutions in the country, the verification of credentials that faculty possessed.