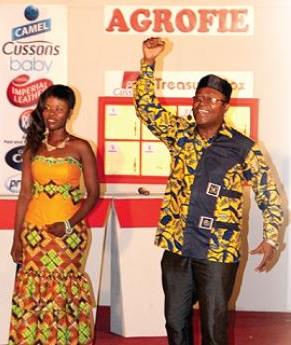 The renowned Ghanaian creative artist, David Dontoh and his agorofie crew stormed the University of Cape Coast and treated patrons with worth repeating memories on Friday, February, 29, 2014.

The show which was part of activates marking the 51st SRC Week Celebrations, was staged at the forecourt of Adehye hall with a hilarious and exciting episodes.

The show as usual was emceed by David Dontoh who was intermittently supported by the ace Ghanaian female DJ, Ohemaa Wo ye Gye and saw TV3’s Guys Avenue’s screen goddess, Babe, also gracing the occasion.

Three lucky students, Attah Sarfo Prince Junior, Bismark Asamoah Mensah and Henry Asarfo Adjei battled it out in the questioning box; with each person winning cash prizes but Henry Asarfo Adjei took the ultimate prize by winning a box of imperial leather soap from PZ Cusson, the brand sponsors for the show.

The SRC President, David Boakye also took the occasion and called on the Ministry of Interior to partner with the University Authorities to intensify security on campus, most especially the diasporas, lamenting on the sudden demise of the late Godwin Chukwudi Ayogu who was gruesomely murdered in less than two weeks ago.

David Boakye also extended a word of appreciation to Unibank for walking the talk with a provision of 400kv plant  to the university free of charge.

Patrons were also treated with renditions from Jford, one of the hottest artistes on campus.