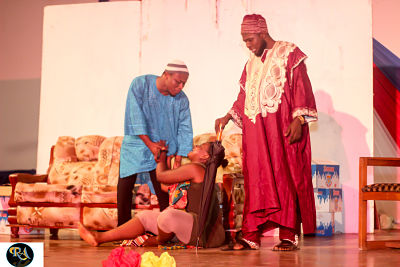 The Department of Theatre Arts and Film studies, University of Cape Coast has launched its first theatre and film season of the 2019/2020 academic year.

The launch will showcase the major productions the department will be undertaking in the course of the semester. The plays, produced and acted by students and some lecturers of the department, forms part of their academic work for the semester.

The Students will thrill patrons with performances from the plays from October to November this year. The plays include; ANANSE IN THE LAND OF IDIOTS, YOU MAY KISS THE CORPSE, TOMBI – YES WE CAN and WHAT MEN WANT.

He also praised students and lecturers within the two departments and the faculty for their selfless effort in making this year’s season a reality.

Mr. Daniel Ofoso Adjei the Western Regional budget analysts a representative of the Western regional minister Hon.Kwabena Okyere Darko-Mensah launching  the theater season, highly praised the department for the good work they are doing even in the midst of the challenges that confront them. He urged the university community to patronize this year’s theater season.

Present at the event was Professor Kwame O. Kwarteng, Dean of The Faculty of Art, the Vice Dean Rev, Prof. Philip Gborsong, Prof Victor Yankah , Prof Akosua Addo from the USA and many other lectures and students within and outside the Department.