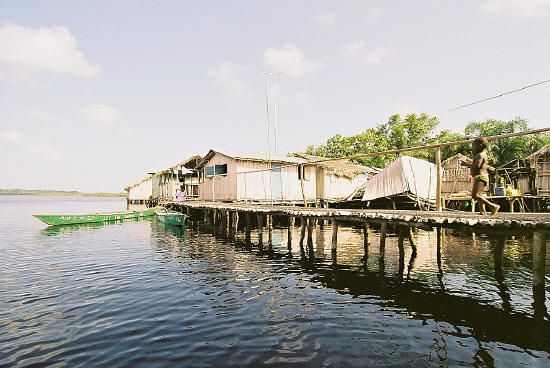 The Faculty of Arts Students Association (FASA) as part of moves to integrate and strengthen inter-departmental bond, embarked on a tour to the historical Nzulezo on Saturday, March, 1, 2014.

The tour was massively patronized by members of the faculty across all levels and gave members not only an opportunity to explore the tourism world but also to socialize and entertain themselves.

The village of Nzulezo is located near the village of Beyin, roughly 90 kilometers west of Takoradi, in the Jomoro District of the Western Region of Ghana.

According to local legends, the village’s name “Nzulezo” in Nzema language, means “surface water”, and the village was built by a group of people from Qualata, a city of ancient Ghana Empire and in present day Senegal, which came about from following a snail.

Nzulezo was built over Lake Tadane, the settlement of Nzulezo consists of stilt-supported structures integrated seamlessly with the water.

Curiously, the village which houses about fifty people can boast of a primary school, electricity and pipe borne water.

The FASA President, Mr. Benjamin Appiah-Kubi, on behalf of the association donated exercise books and undisclosed amount of money to the village to help cushion their welfare.

FASA members who embarked on the tour did not only get the opportunity to be ferried across the lake with a canoe but also left the place fulfilled with awe and excitement.