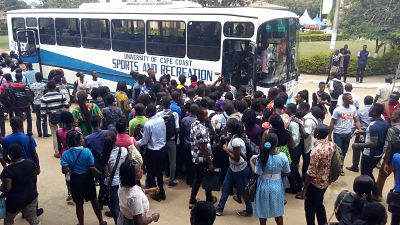 Thousands of first year students (freshers) from the University of Cape Coast (UCC), have signed on to Flippy Campus, the app that promises to put ‘your entire campus experience in your pocket’.

The app’s recent update which was scheduled to coincide with the arrival of the UCC fresher’s on the 8th of August, allows the students to find information relating to orientation schedules from the school, hall and hostel announcements as well upcoming events they can participate in.

The students are currently connecting with their friends in their halls and departments as well as other campuses on the app.

There is also a lot of buzz about interesting stories that have happened since they came to school.

Most of the students are using the apps anonymous commenting feature to contribute and ask a lot of sensitive questions about school life.

The number of students downloading the app on the Google play store has increased incredibly within their first week of school alone.

“We have created a place where the student can enjoy campus life and connect with their friends even in other campuses. Flippy Campus was built with the tertiary student in mind. It is no wonder the students are so excited about it.” Mr David Sleek, cofounder and CEO of Flippy Campus remarked.

“We will be signing up freshers from KNUST and the University of Ghana, Legon in the next few weeks.”

The Flippy Campus app has also gained a lot of popularity these past few months by being the first tech startup to qualify for the DEMO Africa event this September in Nigeria and also gaining worldwide recognition by placing 2nd in the just ended SEEDSTARS World pitching event in Accra last two weeks.

Flippy Campus was also the people’s choice for best startup for Pitch Accra a few weeks ago at iHub, Osu, Accra. The Flippy Campus app is FREE for all tertiary students and is currently available on the Google play store.