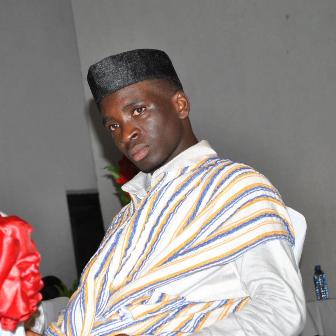 A former SRC President of the University of Cape Coast, Kwasi Addai Mununkum has broken his self imposed two year ban from Facebook to issue a public comment on the leaked nude pictures of an SRC Presidential hopeful, Abena Korkor.

Below is what he posted on his wall on Facebook.

I am back to Facebook, and for an important reason. You can say I couldn’t follow my own promise of leaving facebook for two years. Yes, that is when you believe rules, vows, et al are etched in stones. Mandela, Rosa Parks,Luther King Jr, San Suu Kyi, Ghandi and others all broke the rules before they could “change the world.”

I am here for a single purpose. It is about the leaked nude video of Abena Korkor, a student of University of Cape Coast. I admit my bias, because I have never talked about other people who have been similarly abused. Of course, that doesn’t mean I can never talk about any other. I liked Abena Korkor and still do. I know she’s heard about me as one of her fans and serious critic, although she cannot even pick me from a lineup.

For some reasons, I am one of the few people who have been sent these nude videos multiple times. More than 20 people sent the videos to me within 3 hours when they went viral. These people felt I should know what was happening to someone whose ambition they once sought my opinion about. I have watched the videos closely. And over again. And again. It is not my fault. Everything that is forbidden is so compelling to us. Nude pictures are commodities with a huge audience for obvious reasons. The joy in seeing someone’s nakedness has been high ever since human beings decided to cover what was once opened for public view. It’s just like marijuana, cocaine, hemp. Immediately you attempt to restrict access to something, the curiosity to probe it flies.

Here is where we need to get real. If you’ve never sent or received a nude picture, or a semi nude picture, you are a terrible liar-and a grand hypocrite at best. We all take topless pictures with our shaving kit in front. I might be bias, having a chunk of experience in distance relationship. Nude pictures and videos help keep interest and intimacy alive when your partner is some 1000 miles away. Sometimes you are so motivated (internally) to take that nude picture to the extent that it only takes a stronger force and clairvoyance to prevent you from sending them across. These pictures end up in one of your folders, and if you are like me, in a vault!

If you haven’t done this before, then possibly you are not sexually active (I mean that youthful exuberance), or your sexually active stage in live was during the pinhole camera era when it didn’t make sense to pull your 65kg camera to take a nude picture of yourself…and oh, print it from where? Those cameras lacked automation and selfie capabilities! That’s why you didn’t take nude pictures at that time, not because you are refined than anybody.

Those of us who do take them with our powerful phones and digital cameras, end up, sometimes, getting them automatically uploaded into the cloud (iCloud, OneDrive, Google Drive, etc). And sometime there are chances, and dozens of ways, that these pictures can be accessed by someone. I think this should defeat the whole “this person should have known better” mantra from all these personal privacy gurus who are only trying to be hypocritically stupid. Everyone is allowed to be sexually active. Everyone is allowed to take personal, private pictures or videos and send them to whomever they like. Being chanced upon by a third party doesn’t mean these people were dumb, irresponsible or naive. It means that dumbass who started to circulate them is rather dumb, naïve and irresponsible.

Seriously, think of it this way. Why does anyone feel ashamed about doing shit that is common, average and non-harmful, when done safely and by choice, obviously? Why do people get off to the idea of befriending Abena, but then call her a slut when they find out she gets naked in her own bedroom, or even with her boyfriend? Jealousy? Ignorance? Hypocrisy? Whatever it is, it’s insane. The sad truth is: This could have happened to you. Or me. But it probably won’t because you and I may just not be as interesting and attractive as Abena. So it’s easy for everyone to throw shade at her like she is a bad girl or a slut or naive because she’s been exposed.
But if someone went through my phone right now, they’d find a lot of headless pictures of me in my ex’s dress and bikinis posing and doing stuff I wouldn’t exactly want anyone to see. If I randomly get access to your phone and gallery, I may find worse. So why do we all hound on the unlucky girl and abuse her emotionally?

From snapshots of her Facebook page, it is clear some buffoon has had access to her phone and is fooling with it. Everything up there the person is doing doesn’t look real. They are so fake. Pathetically unprofessional. Nothing will push a person (Abena) with such ambitions to do these. Game theorists cannot qualify this as a plot to gain sympathy. It is just a setup or betrayal by someone and I wonder what the person could be up to. Vengeance? Jealousy? Political expediency? So idiotic.
I was fortunate to interact so closely with the only two female students of University of Cape Coast who once successfully contested SRC Presidential elections but lost. I know the level of personality one needs to even dream to that level, and when you are a lady, you need an extra touch. Abena is no less such a person. Her private live remains hers-solely. When I first heard about her ambition to contest the enviable position of SRC President, I knew what her obstacles were. I knew the physical and emotional manipulations people would want to play on her. I knew the odds she needed to defy. I knew the abuse she would have to endure. And here we are.

If you have these nude videos of Abena Korkor, please do her a favor. The trauma she is going through is so unbearable that if you were her, you probably would have committed suicide. She has been abused enough. If you store her nude videos or share with others, you are perpetuating her abuse. Save her integrity. Save her image. It could be you.

NOTE: Any security person intending to invite me, based on this write-up, to provide details of those who sent the videos to me to aid in investigations should not waste his/her time. I won’t mind you. The state has failed in its responsibility to protect the citizens. We will take our own precautious measures and learn from the experience of others to protect ourselves.