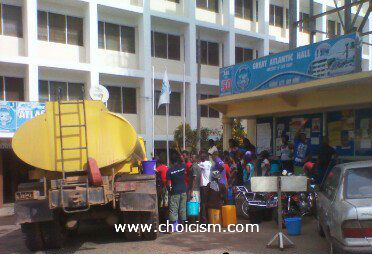 Halls will have Two Tankers of Water Each Day – Estate Officer

By Editor on May 3, 2013
The Estate Officer of the University of Cape Coast, Mr. Emmanuel Gyamfi says although the university is hard-pressed with water issues, it is doing its best to ensure there is a healthy environment in the various halls of residence on campus.

The water shortages that has hit the Cape Coast Metropolis has had a tremendous effect on sanitation in some halls, as Water Closets (WCs) on the male floors in the halls are ‘flooded’ with feacal matter or what is popularly termed Shit on shit.

Mr. Gyamfi, in an exclusive interview with ATL FM News, has however stated that they have decided to give priority to the sanitation officers to clean the WCs in the various Halls of residence in order to help curtail any damaging effect that may arise as a result of this water shortage.

“What we’ve been doing is; when we come, we give a portion of the water to the sanitation people so that they can flush the Water Closets (WCs) because if we don’t do this and there is an epidemic, all that we are doing will come to nothing.”, he said.

He said plans are far advanced to solve this problem proactively, adding that the University has decided to buy two Tankers to add up to the existing ones to cater for the water needs of the school.

“We have just advertised it in the dailies. We want to buy two tankers to augment the old fleets. Then in the future we have plans to buy another two; if we get at least four (4) tankers, it will be ok. Apart from that we are also buying Septic Emptier; the University is planning to buy at least two within two (2) years. Sanitation is something very dear to the hearts of the University Hierarchy” said Mr. Emmanuel Gyamfi.

The Halls, according to Mr. Gyamfi, will have two tankers of water each day beginning 30th April, 2013, till the water crisis is over.