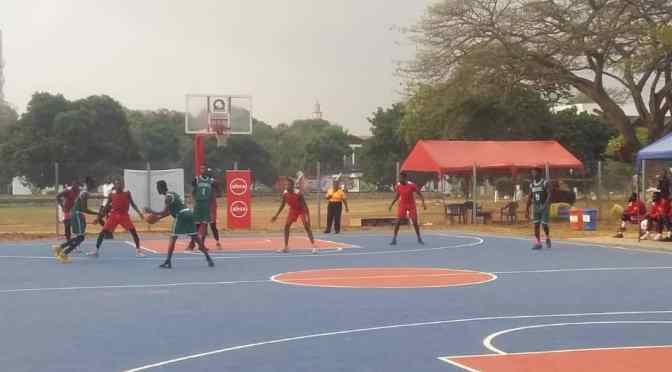 #Legon2020: UCC bounces back after KNUST defeat, vents anger on GIMPA with 85-21 thrashing

The male basketball team of the University Cape Coast returned to winning ways after their heartbreaking loss to the Kwame Nkrumah University of Science and Technology.

Team UCC made light work of debutants Ghana Institute of Management and Public Administration (GIMPA) in their match with the performance of a wounded lion.

GIMPA once again showed they lacked quality and experience of playing in the GUSA tournament after another lacklustre performance. They trailed in the 1st quarter by 02-26.

Team UCC didn’t look a team that were going to relax as they pinned GIMPA back restricting them of a scoreless 2nd quarter while making an additional 20 points to extend their lead to 46-02 by the time the 2nd quarter ended.

In the 3rd quarter team GIMPA did manage to make some baskets and increase their score to 15 to the 64 managed by UCC.

The GIMPA team looked already defeated with they having a poor body language.In the final quarter, UCC once again put up a glamorous show finishing the game 85-21.

UCC now look forward to their match against UG as it would be a win at all cost.