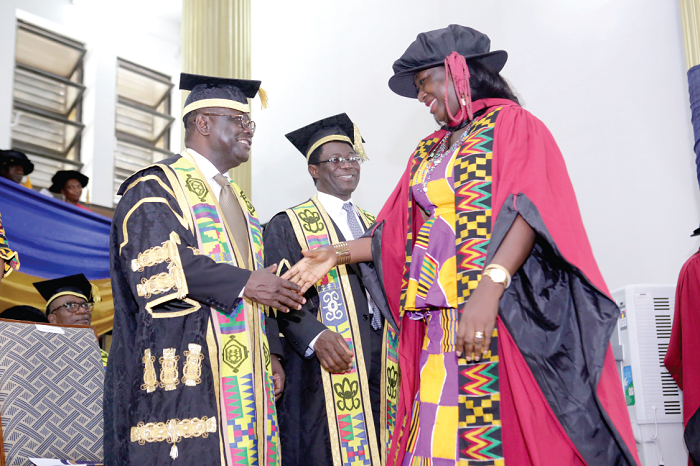 She simply loves to study languages but certainly not the Spanish, French or English that most students love to pursue. Hers is the Akan language, Twi to be precise.

Her passion for the precise usage of the Twi language motivated her to study it from the primary level all the way to the tertiary level.

This indeed has been a very challenging path as some of her colleagues felt she was too brilliant and beautiful to be studying Twi as a language at the university as there were so many programmes she could pursue instead of Twi.

Interestingly, Dr Anima speaks flawless English to the astonishment of those who mostly see her speaking and writing. “So you can speak good English like this?” asked some of her colleagues.

Despite all the challenges, she decided not to look back but take the Twi Language to a greater height.

Significantly, she happens to be the first person to have written her dissertation in Twi. Yes, over 200 pages with about 15 pages of data all in Twi. The work was supervised by Prof Kwesi Yankah and Prof Kofi Agyekum while Prof Akosua Anyidoho Prof Ohene Afoakwa, Dr. Daniel Appiah-Adjei, Mr Kwasi Adomako, Mrs Helen Boatemaa Denteh among others, gave her the support.

Beaming, an obviously fulfilled Dr Anima explained to The Mirror that although she was very proficient in the Twi language, delving into the semantics of the language for her dissertation did not come on a silver platter.

“I was concerned with the analysis of word meanings and relations between them. All quotes in the English Language had to be translated to Twi to mean exactly what the quote means.

Even if it is a terminology in English, you have to get the exact Akan word, not just nearest in meaning,” she stated.

Currently, Dr Anima is the Head of the Akan-Nzema Department of the College of Languages Education, Ajumako Campus of the University of Education, Winneba.

She loves to research into Ethnography of Communication and media discourse (Political and Socio-cultural discourse). Media discourse refers to interactions that take place through a broadcast platform, whether spoken or written, in which the discourse is oriented to a non-present reader, listener or viewer.

Apart from this, Dr Anima, who is herself a media practitioner, loves to explore media linguistics as well. Media linguistics is basically the study of media speech. For instance, “There are things that are known to be taboos but are mentioned anyhow on radio by some of these Twi presenters on both TV and radio,” she states.

She teaches Phonetics of Akan, Language use in Media, Translation, Interpretation, Akan Written Literature, Oral Literature of Akan and Ethnography of Speaking.

Anima as a broadcaster

According to Dr Anima, in the early 80s when she was barely 10 years old, she saw her father’s friend, one Gilbert Ankrah, who was then a news anchor on TV reading the news and told her parents she would like to be like him.

“I said I will also read news when I grow up but I will do it in Twi, and everybody in the living room burst out laughing. My dad asked me if I had ever seen anyone reading in Twi on radio or TV. I closed the chapter because indeed in those days, there were just a few Akan-speaking FM stations, unlike today,” she recalled.

From Bachelor of Arts to Master of Philosophy

As fate would have it, she auditioned to read the news in Twi on Ghana Television (GTV) in 2003. This she did until 2013 when she decided to go back to pursue her doctorate degree.

“The first day I came on TV I didn’t inform my parents but they saw me and were all thrilled, and my dad called me and said I was indeed a go-getter,” she smiled.

While on GTV, Dr Anima also had a special programme on our tradition and culture called ‘Amammerefie’ on Asempa FM in Accra between 2008 and 2010. She also worked at Top Radio as the Head of Akan News and at Radio Universe as well.

Due to Dr Anima’s desire to ensure that the Twi Language is used perfectly, she decided to set up the Language Watch Foundation to help curb the use of vulgar language on the airwaves.

“It is common to see some politicians, presenters and other dignitaries trading insults on air, forgetting that children are equally listening and might pick the indecent Twi Language spoken on air.

Dr Anima also has a new centre coming up which will be known as the Nananom Language and Media Centre where she intends to teach interested people writing skills in Twi, choice of words, public speaking, the use of Twi proverbs, taboo words, among others.

Dr Anima acting as the Queenmother of Akuafo Hall at the University of Ghana, Legon in 1998

Dr Anima had her secondary education at the St Roses Secondary School, Akwatia in the Eastern Region between 1991 and 1993. She advanced to the University of Ghana where she graduated with a Bachelor of Arts in Linguistics and Theatre Arts (Theatre for Extension Communication) in 1995.

For her Master’s Degree, she pursued a Master of Philosophy (M. Phil) in Ghanaian Language Studies and finally crowned it with a doctorate degree.

Dr Anima hails from Atwima-Ofoase in the Ashanti Region. Apparently, Dr Anima is surrounded by academicians in her own home. She is married to Dr Charles B. Wiafe-Akenten who is also a lecturer at the Physiology Department of the University of Ghana.

Their first child, Dr Michael Wiafe-Kwagyan, is also a young lecturer with the Plant Science Department of the University of Ghana; while her three daughters – Nana Adwoa, Awo Asantewaa and Ohenemaa Wiafewaa – are leaving no stone unturned to take after their parents.