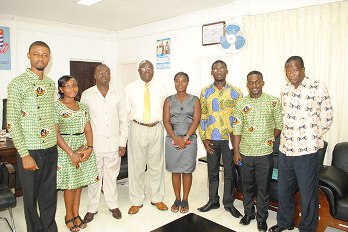 The Executives of the National Service Personnel Association (NASPA), Cape Coast Metropolis have called on the Vice-Chancellor, Prof. D. D. Kuupole in his office to discuss matters affecting the welfare of their members at UCC.

Welcoming the executives, the Vice-Chancellor, Prof. Kuupole noted that UCC would continue to provide opportunities for National Service Personnel to develop their potentials for the job market. He observed that UCC had over the years recruited the highest number of National Service Personnel in the Central Region. He indicated that those who distinguish themselves during the service period would be offered employment.

Explaining the purpose for the visit, the President of NASPA, Mr. Annas Emmanuel Illah, noted that most of the service personnel posted to UCC for the 2012/2013 Service year were not offered accommodation and therefore they had to pay huge rent charges. He used the opportunity to plead for an increment in the rent rebate given to personnel at the end of the service period.

Other issues discussed were planning of the end of service party for service personnel, job opportunities after work and working conditions.

Responding, the Vice-Chancellor, assured the executives that the Division of Human Resources and the Directorate of Finance would work out modalities to secure permanent building to serve as accommodation for National Service Personnel in the future.