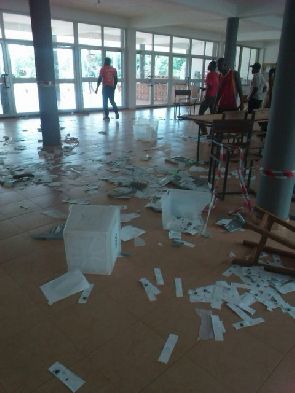 According to sources at University for Development Studies, UDS in Tamale where the congress is currently ongoing, the NPP thugs destroyed ballot papers while counting of ballot papers were ongoing early Friday dawn August 25.

A delegate at the congress who wants to remain anonymous told Ghanacrusader.com that the USAG president Emmanuel Frimpong engaged the services of the members of the invincible forces to provide security for the USAG congress but failed to settle their outstanding arrears resulting in the vandalism.

Get All The Latest Politics Here – GhanaCrusader Political News
He told Ghanacrusader.com that ‘’While counting was ongoing macho men who are members of the Invincible Forces came to destroy everything including ballot boxes and papers’’.

He further stated that the claim by the Invincible forces was however denied by the outgoing USAG treasurer who explained to delegates that she personally settled all outstanding arrears of the Invincible Forces accumulating to GHC 1,500.00

Currently all delegates have returned to their various institutions without electing a new set of leaders to take over the mantle of leadership for the next academic year.

It is expected that the outgoing executives will call for an emergency congress to elect new USAG executives.

The umbrella body for the University students in Ghana is yet to officially issue a statement on the development.